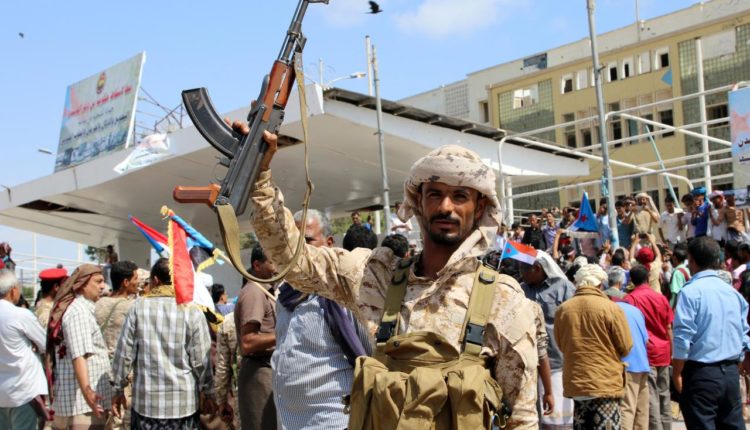 A southern Yemeni separatist at an anti-government protest in the Yemeni port city of Aden.
Photo: Fawaz Salman, Yemen

It is hard to imagine a different fate for Yemen than that of Somalia – numerous balkanized political entities cursed with perpetual distrust and hostility.

On the global scale of human suffering, Yemen outweighs all other countries. In its fourth year, the Yemen war – fueled by regional and other hegemonic powers – is nowhere near its end. Neither the coalition led by Saudi Arabia, which has been accused of war crimes, nor the Iran-backed Houthi rebels, accused of recruiting child soldiers, are close to winning this conflict.

Yemen is a humanitarian catastrophe in progress. And on the political front, the way things are evolving, the Somali model might be a fait accompli. It is hard to imagine a different fate for Yemen than that of Somalia – numerous balkanized political entities cursed with perpetual distrust and hostility.

Two-Sides of the Same

As someone whose ancestral background is deeply rooted in both Somalia and Yemen and with a keen interest in post-colonial political evolution in both societies, I can attest to the profound cultural similarities between these two countries and their peoples.

Both countries have never been left on their own in modern history. Both societies are dominated by a primitive tribal system that preserves history through oral traditions that commonly cling on to toxic narratives against other tribes. Both tend to zealously defend tribal honor or vanity even if that means sacrificing their countries’ interests. Both have religious extremist groups. Both are considered rich in natural resources though they remain two of the poorest nations in the world. In both countries, a culture of corruption is as rampant as their addiction to khat (qat), a plant with amphetamine-like stimulant potency. And the rule of law is by and large superseded by the tribal or clan social and political orders.

Furthermore, both are located in coveted strategic geographical areas. Both have separatist or secessionist movements whose claim to self-determination is based on the artificial demarcations of the British colonial power. Both nations have foreign elements that are hell-bent on advancing their own exclusive interests. And foreign interests in both countries are so camouflaged with domestic political affairs that it is almost impossible to identify which is which.

Despite these daunting similarities, I believe transformation is still possible, though it will require herculean sacrifices.

Geopolitical conflicts have certain distinctive characters that set them apart from conventional ones. Actors who are set to reap the strategic benefits are seldom visible in the fields. Covert actions frame or shape the overt ones. And those who ultimately show up as most equipped firefighters or the most enthusiastic life-savers are often the real arsonists.

These arsonists, who are routinely armored by credulous or greedy local citizens, are on a mission to establish favorable realities on the ground. They re-engineer the neighborhood and create an environment conducive to perpetual (but manageable) insecurity that makes the local populations in desperate dependency.

The Saudi-led coalition has taken a page out of the playbook used in the catastrophically failed Iraq war. The strategy was simple: invade under the altruistic pretext of coming to save Yemen. Inflict awe-striking destruction. Destroy historical sites, records, and rituals that could reinvigorate collective memory and collective identity – a sense of nationhood.

Pick a side on a sectarian divide knowing full well that in tribal societies there is nothing wholly monolithic. Support various zero-sum tactics in the hope that they will play right into the Saudi hegemonic interest in the region. Don’t worry about an exit strategy. Count on installed puppets and count on the support of the exploitable sectarian masses and their raging appetite for ethnic-cleansing.

The battle to control Hodeidah is still underway, and the longer this continues, the worse the humanitarian crisis will get. After Houthis refused to adhere to the demands to disarm and hand over the Hodeidah port and evacuate the city, the Saudi-led coalition forces have launched a ferocious invasion that shook the foundation on the Houthi control of strategic geographical areas in Yemen.

Soon after, an Emirati navy vessel was destroyed, and missiles were fired at Saudi Arabia’s capital Riyadh for the first time. This forced a swift change in rhetoric and preconditions and lent the U.N. proposal a fresh appeal for both sides.

The Hodeidah battle is broadly considered as the most significant since the fall of Sana in September 2014. For the Houthis, it is a “do or die” struggle. Though the coalition claims that the Houthis receive their weapons through Hodeidah, it has been the most important port where 70 percent of Yemen’s food and other essential supplies come through.

If this battle drags on for long, it will exacerbate an already catastrophic humanitarian situation in Yemen.

The likely outcome for Yemen is the Somali model – tribal fiefdoms exposed for perpetual exploitation. On July 17, a two-day pow-wow ended in Brussels. The so-called Somalia Partnership Forum brought together six Somali presidents to discuss the affairs of their single nation through a third party or representatives of 58 nations that are all presumably willing to pour more money into Somalia project than they are willing to fight poverty and homelessness in their respective countries.

So, is there an alternative?

The only means to change this imminent trajectory is to accomplish what Somalia has been stuttering and stumbling with – and at times faking it – for decades: a genuine reconciliation followed by a rigorous campaign to sacrifice claims of exclusive tribal rights for inclusive equal rights for all Yemeni citizens. This requires empowering the educated younger generation who by and large transcend the self-destructive clannish worldview of the traditionalist elders.