Abukar Arman: Civil strife in Ethiopia has the potential to destabilise the whole region 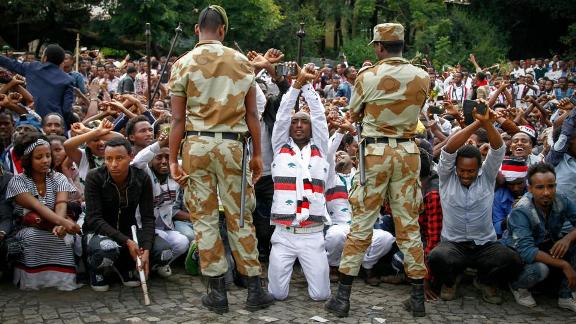 Ethiopia is experiencing ethnic and political tensions that could have far-reaching implications for its neighbors in the Horn of Africa, and beyond.

The Horn of Africa is among the most congested, eventful, and most volatile geopolitical intersections on earth. It is where the West meets the East in a highly competitive game of strategic positioning for economic or hegemonic advantage.

China and Turkey who, more or less, employ similar soft-power strategies have tangible investments in various countries in the region, including Ethiopia. However, the widespread discontent with Ethiopia’s repressive impulses and its ethnic favoritism that led to a particular ethnic minority (Tigray) to exclusively operate the state apparatus has inspired Arab Spring-like mass protests. These protests have caused serious rancor within the ruling party. It is only a matter of time before this haemorrhaging government might collapse.

So, who is likely to gain or lose from this imminent shockwave in the region’s balance of power?

Ethiopia — a country previously considered as a stable regional hegemon, a robust emerging market, and a reliable counter-terrorism partner — is on the verge of meltdown, if not long-term civil strife.

Today, the Ethiopian government is caught between two serious challenges of domestic and foreign nature: the Oromo/Amhara mass protests tacitly supported by the West, and the water rights conflict with Egypt, Sudan and Somalia.

Ethiopia is claiming the lion’s share on the Nile that runs through it and other rivers that flow from its highlands for the Grand Renaissance Dam – thus presenting existential threats to the connected nations.

For the third time in three years, the Shabelle River has dried up, putting millions of Somalis at risk of starvation.

But the current government is not ready for a substantive change of guard. The longer the mass protests continue and the minority-led government continues to offer artificial or symbolic gestures of prisoner releases — while declaring a second ‘state of emergency’ in two years— the faster Ethiopia will become destabilised and the faster foreign investments will fizzle away.

Worse — though seemingly unthinkable — the ‘favorite nation’ status granted to Ethiopia after becoming the US’ main partner in the global ‘War on Terroris’ is slowly corroding.

Despite this week’s visit from US Secretary of State Rex Tillerson, the US State Department is gradually turning its back on Ethiopia for a number of reasons; chief among them, is its double-dealings on the South Sudan issue.

Despite the facade of US/China collaboration to end the South Sudan civil war, the geopolitical rivalry between these two giants has been pressuring Ethiopia to pledge exclusive allegiance to one over the other.

With China’s huge investments on Ethiopia, Sudan and South Sudan’s oil fields – making a choice won’t be too difficult.

Several years ago I wrote an article arguing that the two most stable nations in the Horn (Kenya and Ethiopia) will become more unstable as Somalia becomes more stable.

Today, the Ethiopian government is facing the most serious threat since it took power by the barrel of the gun, and Kenya has a highly polarised population and two presidents ‘elected’ along clan lines.

Kenya — the nerve center of the international humanitarian industry — could just be one major incident away from inter-clan combustion.

The Ethiopian government has launched a clandestine campaign of strategic disinformation intended to fracture or breakup opposition coalitions and recruit or lure potential comrades.

Ethiopian intelligence officers and members of the diplomatic corps together with some ethnic-Somali Ethiopians have been recruiting naive Somali government officials, intellectuals and activists with a Machiavellian disinformation campaign.

Meanwhile, IGAD — Ethiopia’s regional camouflage — calls for an open-borders agreement between member states. Despite broad-based public perception that for a fragile state like Somalia, such an agreement would be tantamount to annexation, some Somali politicians are eagerly carrying its banner.

These kinds of desperate campaigns and the abrupt resignation of Prime Minister Hailemariam Desalegn only underscore the fact that the government’s days are numbered.

Sudan is caught in a loyalty triangle (Ethiopia, Egypt and Turkey) with competing powers. Sudan needs Egypt to address threats faced by the two nations regarding the diminishing access to the Nile by reasserting rights granted through the Anglo-Egyptian Treaty.

It needs Ethiopia to protect China’s economic partnership and to shield President Omar al Bashir from Western harassment through IGAD.

It also needs Turkey for development and for a long-term strategic partnership. Sudan has become the second country in Africa to grant Turkey a military base, with Somalia being the first.

When neocons dominated US foreign policy and the global ‘War on Terror’ was the order of all orders, Eritrea was slapped with sanctions. It was accused of being the primary funder and weapons supplier to al Shabab.

Today, though neither the UN Monitoring Group on Somalia or Eritrea nor any expert free from Ethiopian influence holds such a view, yet the sanctions have not been lifted.

The Ethiopian lobby and certain influential elements within US foreign policy-making circles continue to label Eritrea as a Marxist rogue state that undermines regional institutions such as IGAD and international ones like the UN Security Council; a closed society that espouses a deep rooted hatred towards the West.

Against that backdrop, the UAE has been investing heavily in Eritrea since 2015 or the beginning of the Yemen war that has created one of the the worst humanitarian disasters. The Emirati military (and its Academi/Blackwater shadow) now operates from a military base in Assab. Whether that’s a Trojan Horse or not, is a different discussion altogether.

The current wave of discontent against the Ethiopian government is likely to continue. But, considering how the Tigray has a total control on all levers of power, a transition of power will not be an easy process.

Ethiopia is also rumoured to have created an ethnically Somali counterinsurgency force in the Liyu Police. This ruthless force has already been used against the Oromos as they were used against Somalis of various regions that share a border with Ethiopia.

The extrajudicial killings and human rights violations are well documented. Despite all this, the Oromo and Amhara are set to reach their objectives albeit with bruised and bloody faces.

Will their coalition remain or, due to their historical distrust, will each eventually invoke its constitutional right to secede?

Whatever the outcome, any scenario of civil war or chaos in Ethiopia could put the entire Horn in danger and create a potential humanitarian catastrophe, especially in Somalia.

Meanwhile South Sudan is a lightyear away from sustainable political reconciliation especially since the foreign elements fueling the fire are not likely to stop any time soon. Djibouti remains the host of the most intriguing geopolitical circus. So, that leaves Eritrea as an island of stability in the region.

In the foreseeable future, Turkey could divest her investment out of Ethiopia into Sudan, Somalia and Eritrea. China will diversify her portfolio to include Eritrea. And the US — with no new policy — will continue droning her way through geopolitical schizophrenia.