NUSOJ ANNUAL REPORT: Media repression mounts in Somalia in a climate of “death, detention and duress” 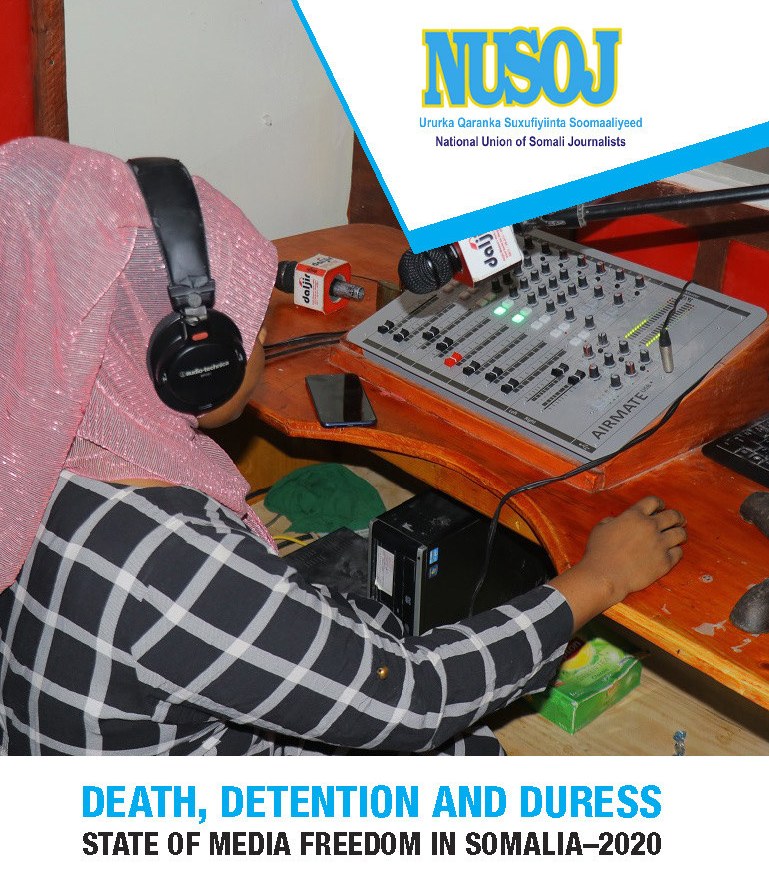 In 2019, journalists in Somalia’s different regions have continued to face an array of serious repressive attacks including killings, threats, physical assaults, harassment, intimidation and censorship, according to the Annual Report on State Media Freedom in Somalia by the National Union of Somali Journalists (NUSOJ).

The number of attacks in 2019 has reduced in comparison to previous years. However, the National Union of Somali Journalists (NUSOJ) still monitored and documented 84 cases of killings, threats, intimidations, physical assaults and censorship as well as attacks on news media organisations. In these reported incidents, journalists and media houses were attacked specifically because of their work and/or news reports.

The annual report reveals that 84.3% of the documented attacks against journalists and media houses in 2019 were committed by perpetrators in the Regional Administrations or Federal Member States. Al-Shabaab was responsible for 3.6% of the incidents reported in 2019, mainly the killings. Forces of the Federal Government of Somalia, including the police and national army, were responsible for 11.7% of media freedom violations. The means of violations were diverse, depending on the aim of the perpetrator.

“The 2019 year ended with serious challenges to the media in general and journalists in particular. The intolerance of journalists’ independence accompanied by the abuse of governmental organs, continue to place journalists in dangerous situations” said Omar Faruk Osman, NUSOJ Secretary General.

Three (3) journalists were murdered in Somalia in 2019 for which Al-Shabaab claimed responsibility. For the first time in 10 years, no journalist was killed or wounded in Mogadishu in 2019, a city known to be the mostly deadly place for journalists in Somalia.

Twenty-five (25) journalists were arrested in different regions of Somalia because of their media work. Puntland, Somaliland and Southwest State effectively sought to punish journalists through Somalia’s old and draconian criminal laws. Somaliland is the leading offender in media repression in Somalia and seems to have institutionalised its desire to use the judiciary as the most effective tool to suffocate journalists, silence independent media houses and curtail of freedom of speech. The only journalist currently serving time in jail is in Hargeisa.

According to the report, regional Administrations or Federal Member States as they are officially known, have taken a similar stance against journalists. In the run-up to the disputed elections of Jubbaland, journalists came under fire. New to the media repression tactic, Jubbaland administration bought plane tickets for critical or outspoken journalists and deported them to Mogadishu. In Southwest State, journalists and media houses not favoured by the administration can lead to incarceration.

“Somalia’s regional administration (Federal Member States and Somaliland) have been recognised as the principal violators of rights and freedoms of journalists in 2019. These administrations appear to believe that independent and critical journalists and their media houses are adopting an oppositional stance to the government, and are thus deserving of the treatment they receive” added Osman.

Taking a turn for the worse, Puntland attempted to prosecute a journalist through military court for reporting alleged human rights abuses by Puntland police. In addition, forced confession was applied to challenge national and international outcry over the issue. Journalists in Jowhar also experienced severe repression and abuse of power by top executives of Hirshabelle.

As compared to preceding years, there has been some respite in media repression for which the Federal Government of Somalia was largely responsible in previous years. This was partly the result of senior government officials discouraging junior officials from arresting, intimidating or taking a journalist to court. The improved relationship between senior government communications officials and journalists contributed to dispelling perceived enmity and misgivings between the parties and resolving journalists’ grievances in favour of victims. The Federal Government, however, needs to contain and discipline its errant and violent soldiers both in the police and Somali national army.

“Despite constitutional guarantees and some relative improvements, the noble struggle for media freedom in Somalia is far from over. Inhibitive laws need to be challenged, impunity needs to be tackled head on, and enemies of freedom of expression must be exposed” declared Osman.