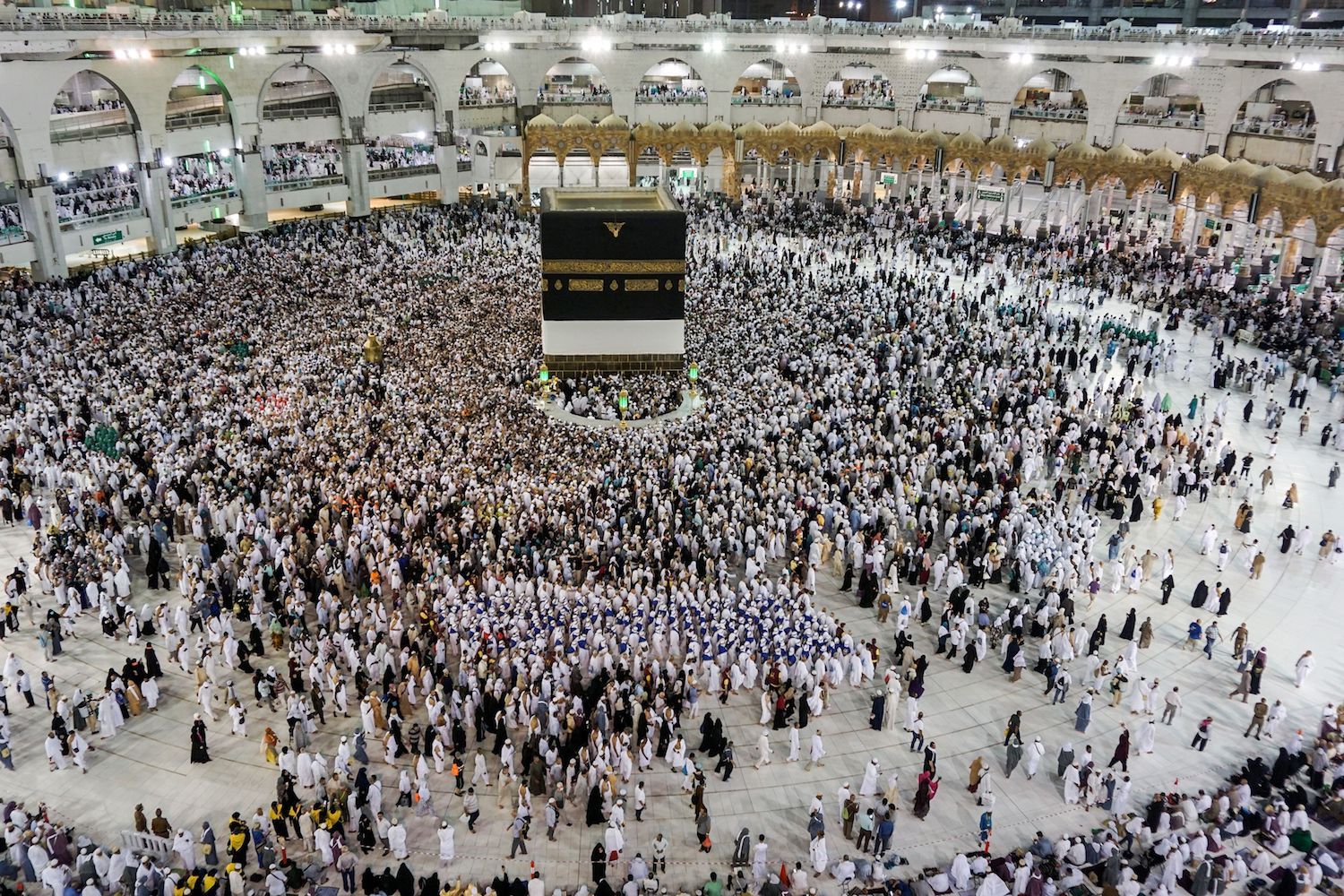 Muslim worshippers walk around the Kaaba, Islam’s holiest shrine, at the Grand Mosque in Mecca on Aug. 17, 2018. AHMAD AL-RUBAYE/AFP/GETTY IMAGES

The Saudi crown prince’s regional aggression and disdain for human rights have prompted religious scholars and pious pilgrims to refuse to go on the hajj.

Crown Prince Mohammad bin Salman has attempted to cast Saudi Arabia in a more positive light and mask the country’s more aggressive internal and foreign policies by undertaking so-called liberal reforms. But it has not been enough to silence those who continue to draw attention to his government’s human rights abuses.

The rising death toll of civilians killed by Saudi bombs in Yemen, the horrific slaughter of Jamal Khashoggi at the Saudi Consulate in Istanbul, and Riyadh’s aggressive approach to the Iran crisis have led some of Saudi Arabia’s Sunni allies to reconsider their unwavering support for the kingdom.

In late April, Libya’s most prominent Muslim Sunni cleric, Grand Mufti Sadiq al-Ghariani, called for all Muslims to boycott the hajj—the obligatory pilgrimage of Muslims to Mecca. He went so far as to claim that anyone who embarked on a second pilgrimage was conducting “an act of sin rather than a good deed.” The reasoning behind the boycott is the suggestion that boosting Saudi Arabia’s economy through pilgrimage continues to fuel arms purchases and direct attacks on Yemen—and indirectly Syria, Libya, Tunisia, Sudan, and Algeria. Ghariani added that investment in the hajj would “help Saudi rulers to carry out crimes against our fellow Muslims.”

Ghariani is not the first prominent Muslim scholar to support a ban on the hajj. Yusuf al-Qaradawi, also a Sunni cleric and vocal critic of Saudi Arabia, announced a fatwa in August last year banning the pilgrimage, instead stating, “Seeing Muslims feeding the hungry, treating the sick, and sheltering the homeless are better viewed by Allah than spending money on the hajj.”

Saudi Arabia’s influence is not merely linked to its political and military capacity but also to its historical ties to Islam. As the home of both Mecca and Medina, Islam’s two holiest sites and the location of the Kaaba and burial place of Prophet Muhammad respectively, Saudi Arabia’s influence extends far beyond its Arab neighbors but to the Muslim world in general. More than 2.3 million Muslims from all sects flock to Mecca during the annual hajj pilgrimage and many more throughout the year, making visiting Saudi Arabia an aspiration for many Muslims around the world.

More than 2.3 millionMuslims from all sects flock to Mecca during the annual hajj pilgrimage and many more throughout the year, making visiting Saudi Arabia an aspiration for many Muslims around the world.

This relationship with Islam has instinctively led many from the Sunni Arab world to look to the kingdom for daily guidance on religious issues. In response to Iran’s 1979 Islamic Revolution and fear of it cascading throughout the region, Saudi Arabia has spent millions of dollars exporting its brand of Islam through the funding of mosques around the world, many of which have been linked to Islamic extremism in the West, as it claims to be leader of the Muslim world.

For years, Saudi Arabia has been working toward becoming a regional hegemon in the Middle East, whose claim to power, in recent years, is threatened only by Iran. As one of the world’s largest oil exporters with close ties to the United States, Saudi Arabia found itself basking in the steadfast support of many of its neighboring states for decades.

Despite mounting evidence of the royal family’s role in the “premeditated execution” of Khashoggi, the Trump administration hastily discredited any indication of Saudi involvement in the killing, with Secretary of State Mike Pompeo recently neglecting to mention the topic when meeting with Saudi King Salman. The White House and U.S. State Department might be willing to turn a blind eye, but fellow Muslims have not been as forgiving.

Throughout the Middle East and in other Muslim-majority nations, there has been growing concern over the slaying of Khashoggi, as well as the rising death toll in Yemen

Throughout the Middle East and in other Muslim-majority nations, there has been growing concern over the slaying of Khashoggi, as well as the rising death toll in Yemen, which is expected to reach 230,000 by 2020 through the often indiscriminate airstrikes by the Saudi-led coalition—which has bombed hospitals, funerals, children’s school buses, and weddings—in what has been described as the “worst man-made humanitarian crisis of our time” by U.N. officials. Saudi Arabia’s truculent approach to the Yemen war has isolated itself within its own coalition; even the Emirati government has shown some discomfort toward the Saudi approach.

Unlike past attempts to boycott Saudi Arabia, the current effort has crossed the sectarian divide.

Unlike past attempts to boycott Saudi Arabia, the current effort has crossed the sectarian divide. In 2011, Riyadh violently repressed Bahrain’s popular uprising at the request of the Bahraini government. The protests were led by Shiite Muslims, who are a majority in the Sunni-ruled country, and Iraqi activists reacted by calling for a boycott of all Saudi products. Protests across Iraq were organized and attended by Shiite clerics, academics, and politicians alike. At the time, then-Iraqi Prime Minister Nouri al-Maliki said that if the Saudi-led violence were to continue, “the region may be drawn into a sectarian war.”

Today, calls for boycotting the kingdom have spiraled and they aren’t just coming from Shiites. The hashtag #boycotthajj has been trending on Twitter, amassing nearly 16,000 tweets. Sunni clerics around the world have also called for a boycott. The Tunisian Union of Imams said in June that “the money [from the hajj] that goes to Saudi authorities is not used to help poor Muslims around the world. Instead it is used to kill and displace people as is the case currently in Yemen.” Given that the hajj is one of the five pillars of Islam, prescribed as obligatory for all Muslims, the call for a boycott indicates the genuine, acerbic concern toward Saudi behavior. Should this trend continue, Saudi Arabia’s claim to being the spiritual home of Islam would be at risk—and it could take an economic hit, too.

Pilgrimage is vital to the Saudi economy and worth $12 billion annually, amounting to 20 percent of non-oil GDP, and is expected to rise to $150 billion by 2022, given the investment in luxury hotels by the Saudi government. Such investment has caused profits to skyrocket, pricing many poorer Muslims out of trips to the kingdom.

Saudi officials have also abused the sanctity of the city of Mecca to promote their political ideology.

The calls for boycotting the hajj are not the first time the religious pilgrimage has been politicized. Saudi Arabia itself has in recent years banned both Qatari and Iranian nationals from partaking due to growing political differences between the states. Saudi officials have also abused the sanctity of the city of Mecca to promote their political ideology.During one prayer sermon in October last year, Sheikh Abdul-Rahman al-Sudais, the imam of the Great Mosque in Mecca, stated: “The path of reform and modernization in this blessed land … through the care and attention from its young, ambitious, divinely inspired reformer crown prince, continues to blaze forward guided by his vision of innovation and insightful modernism, despite all the failed pressures and threats,” implying that no Muslim should be questioning the Saudi political elite.

In an effort to flex its political might, and inevitably draw attention away from the Khashoggi killing and the country’s continued leading role in the war in Yemen, Saudi Arabia organized an emergency summit in late May in Mecca to put the focus back on Iran. During the summit, which brought together in separate meetings Arab leaders, the Gulf Cooperation Council, and the Islamic world, Saudis called for support from Arab countries to deal with the Iran crisis by “using all means to stop the Iranian regime from interfering in the internal affairs of other countries, harboring global and regional terrorist entities, and threatening international waterways.”

In defiance, and highlighting Saudi Arabia’s waning status as the regional power, Iraq fully opposed the closing statement, which was to denounce Iran, and instead pledged a message of support toward Iran and called on other countries to help stabilize the country. At the summit in Mecca, Iraqi President Barham Salih stated: “Honestly, the security and stability of a neighboring Islamic country is in the interest of Muslim and Arab states,” referring to Iran. Similarly, during the summit, Saudi Arabia failed in getting the Organization of Islamic Cooperation—an international organization with headquarters in Jeddah—to isolate and condemn Iran.

As the death toll in Yemen rises, countries around the world are now calling for an economic, religious, and political boycott of Saudi Arabia—not just the banning of arms trade. Riyadh is running out of friends in the West, and, now, its relationships with regional allies are starting to show cracks. Should the Trump administration fail to secure a second term, Saudi Arabia may be left with few international friends and its claim to leadership of the Muslim and Arab world will be severely damaged.

Ahmed Twaij is an independent Middle East analyst and an advisor to the Iraqi nongovernmental organization Sanad for Peacebuilding. He is also a photojournalist and has worked with a number of international humanitarian and human rights organizations. Twitter: @twaiji