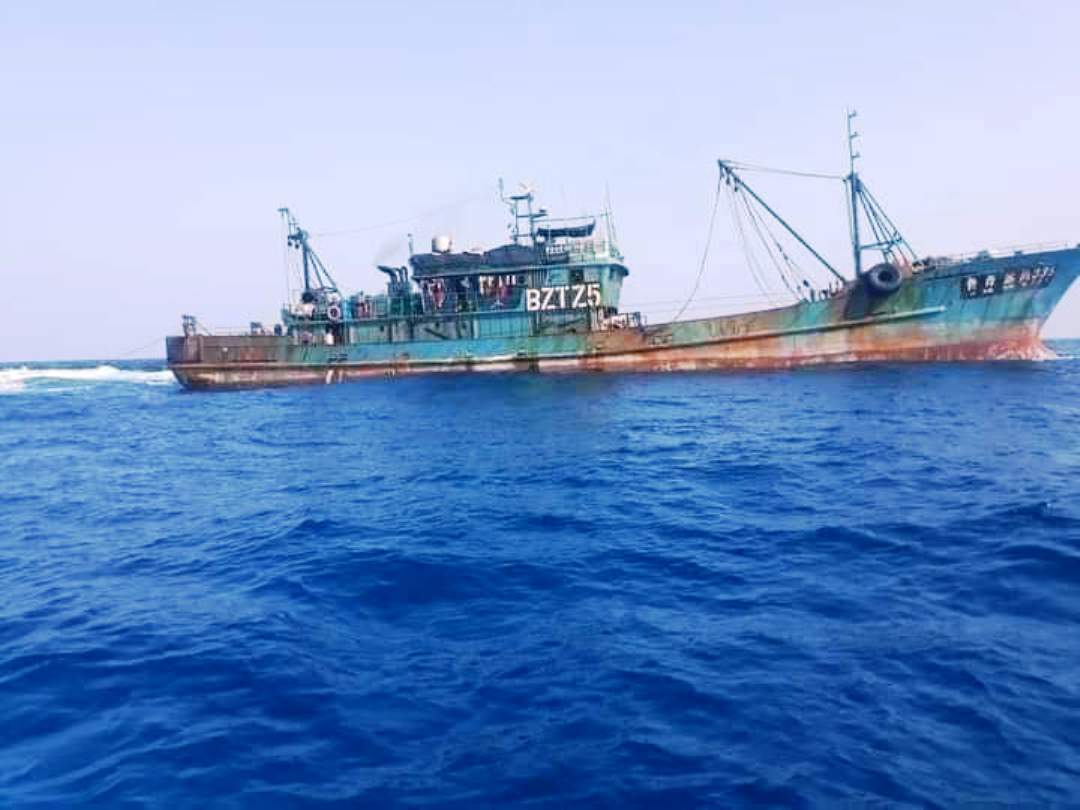 On November 14, 2021, Galmudug State Coast Guard arrested a Chinese vessel with 17 crew members on board for illegal fishing in the coastal waters of Hobyo. The vessel was immediately released by the office of the President of Galmudug State after talks between officials of the Federal Ministry of Fisheries and Marine Resources (MFMR) and Galmudug State. Galmudug authorities said the official document signed by the Deputy Minister of MFMR Abdullahi Omar Abshirow, that permits 4 vessels to have one month trail fishing access for what he called “information and knowledge gathering of the fish resources of the area,” was only shared with them after the incident. The MFMR admitted its ‘mistake’ and requested to solve the issue internally without public statements. Galmudug authorities ordered the fishing vessel to leave Somali waters, according to an informed source.

The vessel is identified as (LU QING YUAN YU 335), based on photo evidence (A) that was taken when the vessel was arrested, and by comparing with another Chinese pair trawler (B) previously investigated on its way to North Korean waters, there is no doubt that the arrested vessel and the other 3 vessels (LU QING YUAN YU 333, 328 and 329) authorized by MFMR are trawlers.

There are several reasons why the MFMR’s claim is illegal and baseless. First, this action violated the Somali Fisheries Law (Article 33, No.1) that prohibits all forms of trawling in Somali waters. Second, these trawlers are secretly registered (Somali-flagged) which means Somalia is responsible as (flag state and coastal state). Third, these trawlers are dark vessels which means they turn off their automatic identification system (AIS) to avoid detection and indicates that they’re engaged in illegal fishing. Forth, this action violated the 24nm area reserved for Somali fishermen. Fifth, using 4 commercial pair trawlers for research purposes for a one-month period, is another very suspicious point, considering that the area was repeatedly trawled before. Sixth, officials of Galmudug State including the Minister of Ports and Fisheries were not informed earlier about these vessels and their purpose.

In addition to the above reasons, the trail fishing authorization document shows wrong ministry name and didn’t provide any details about the type and size of the vessels, what kind of data will be collected, institution conducting, and instruments used for information gathering. I emailed the Deputy Minister of the MFMR Abdullahi Omar Abshirow, asking additional questions. Mr. Abshirow had not replied to my email.

The MFMR’s claim ‘information and knowledge gathering’ is ridiculous and only used as a cover up for illegal fishing. The officials of the MFMR at the federal and state level have been successful for a long time to make money at the expense of the Somali people and to get away with their corrupt practices. Last three decades, Somalia has become a safe haven for “politically protected” trawlers and other fishing vessels wanted in many countries for fisheries crime. It’s time to hold these officials accountable and end illegal fishing in Somali waters. The next government must put in place a clear national plan to reform the Ministry of Fisheries and Marine Resources and the Ministry of Ports and Marine Transport.