Mogadishu: Out of Tragedy, An Opportunity for Somalia 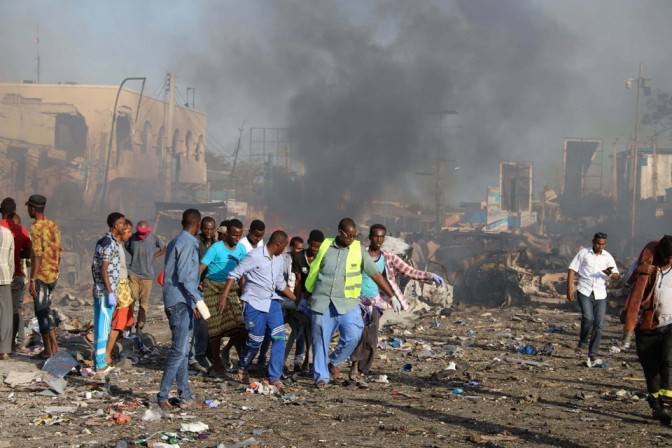 Saturday’s twin-truck suicide bombings in Mogadishu, Somalia’s capital, have so far killed at least 320 people and injured hundreds. The assault took place at a buzzing intersection on a busy afternoon during peak traffic, causing maximum damage to people and property. In the aftermath, men and women searching for victims in the rubble looked small amid the mounds of steel that formed unnatural valleys. In the coming days, more are certain to die in the city’s few under-resourced and over-crowded hospitals.

As Somalia’s political class struggles to respond to Saturday’s attack, it will have its greatest opportunity to prove to a cynical but eternally hopeful people that despite decades of bloodshed, dysfunction, and corruption, the government is a legitimate, trusted entity, committed to protection and progress.

The most persistent lag with which the political elite will be forced to reckon is security reform. “Saturday’s attack took the deadly game to a new level,” Abukar Arman, Somalia’s former special envoy to the United States, wrote to me over Twitter. “The Somali government must understand this: Overhauling the security apparatus (both domestic and foreign aspect) is an existential necessity,” he said.

No entity has claimed responsibility for the atrocity, but al-Shabaab, the fundamentalist group whose roots in Somalia go back decades, and which officially affiliated itself with al-Qaeda in 2012, is the only real contender. African Union troops supported by local militias have pushed al-Shabaab out of major cities in the past few years—but the group has not lost influence. Its spies have embedded themselves in society, and its members may have infiltrated government bodies. It still controls vast swaths of the heartland.

Over the years, a tangle of countries, most significantly Turkey, Qatar, Saudi Arabia, the United Arab Emirates, the United States, Britain, nations in the European Union, and the African Union (especially Djibouti, Kenya, Uganda, Ethiopia, and Burundi) have invested billions in Somalia to boost its education system and infrastructure, to aid its humanitarian relief efforts following droughts and disease, and to fund capacity-building for its national army. For the international donor community, Somalia, which forms the eastern rim of the horn of Africa, is strategic both financially and militarily. More than 2 percent of the world’s goods travel through its nearest waterway, the Gulf of Aden, making it a major commercial chokepoint for Europe. The country’s proximity to Yemen and ties with the Middle East and Central Asia open it to influence and spillover from radical groups. The Islamic State, for one, has tried to infiltrate the country from the northeast.

But despite all the foreign dollars, little has changed: The Somali government has received billions but has been ranked by Transparency International as the most corrupt on earth for 10 years running.

Somalis tend to expect little from from their government, ever since the formal state collapsed more than two decades ago, brought down by internal power struggles and clan politics. Recent years have brought a relative calm to the country, with the first widespread representative elections held this past February. (It used to be too dangerous to vote outside Mogadishu, with polling stations regularly coming under attack.) But Somalis are well aware of the endemic corruption that runs through every sector: When it comes to al-Shabaab, they don’t expect the government to protect them, relying instead on family, friends, and local militias. What happened Saturday is a justification of that sentiment—the trucks chock-full of explosives drove down a busy corridor, passing multiple government check points before detonating in the capital.

“This has always been the billion-dollar question. If you think about how much money goes to Somalia every year, will this generate the political will to actually do what needs to be done to stabilize Somalia?” asked EJ Hogendoorn, the International Crisis Group’s Deputy Africa Program Director when we spoke on the phone.

Much of the money designated to rebuild a country synonymous with the term  “failed state” has gone straight into politicians’ pockets. Last year, the government had a budget of $246 million. Just $0.8 million of that was designated for health spending, despite Somalia’s myriad problems including soaring maternal mortality rates (one in every 12 women in Somalia dies in childbirth), dearth of functioning hospitals, and collapsed sanitation infrastructure, which allows preventable diseases like cholera to run rampant. Meanwhile, the prime minister and president’s offices each received nearly $5 million in the budget, Reuters reported.

The political will to which Hogendoorn refers is evident in the Somali people. Already, hundreds have taken to the streets to demonstrate their outrage, condemn the attack, and show solidarity with the victims. Mogadishu is crowded with people lined up to donate blood. Volunteer nurses and medical students are rushing to hospitals, and informal groups have formed to support search and rescue operations.

The government and civilians are actively responding to stymie the destruction and prevent further loss of life in under-resourced hospitals, though Mohamed Moalim, the permanent secretary of the ministry, said that the facilities lack sheets, blankets, medical equipment, food and water.

The bigger picture remain ambiguous, however. Right now, the Somali National Army exists in name only. The aforementioned billions of dollars authorized for army recruitment and training have been poorly organized as the countries leading the charge only recently reached a coordination plan after years of spending.

In April, at a conference in London, the Somali government’s proposal for a “National Security Architecture,” a blueprint for the construction of a complete security force, was greeted as a watershed moment, and met with the approval of international funders. It laid out deployment targets for the army, navy and police, established a chain of command, and set milestones, including due dates for an accurate tally of all the members of the army, navy, or police, as well as a payroll system and legislation on countering violent extremism.

But little progress has been made. Instead, things seem to be spiraling. There’s been increased bloodshed within the ranks. Nine people died in a fight between the military and police in September. In June, five people died and 14 were wounded when soldiers fought over food aid distribution in Baidoa, a town south of Mogadishu.

In addition to the physical fighting, political tension has been on the rise in recent months as federal states tussled over the national government’s neutral position on the Gulf standoff. Last week, both the army chief and the minister of defense resigned, for reasons still unknown. Since the bombing, Somalia’s Internal Security Ministry spokesman has left office, though rumors in national media say he was fired.

Over a WhatsApp message, Moalim said that changes the government expected to make include investigating how vehicles carrying bombs are detected, where they are made, and the network of people through which such attacks are planned. “I’m feeling frustrated!” Abdifatah Hassan Ali, a human rights activist who lost two friends in the bombing (one is still missing), wrote in a Twitter message. “This is beyond government’s capacity, but again I blame them for not taking much consideration into the security.” He is also frustrated with the African Union. “Their peacekeeping mission failed,” he said “and they don’t have an exit strategy.”