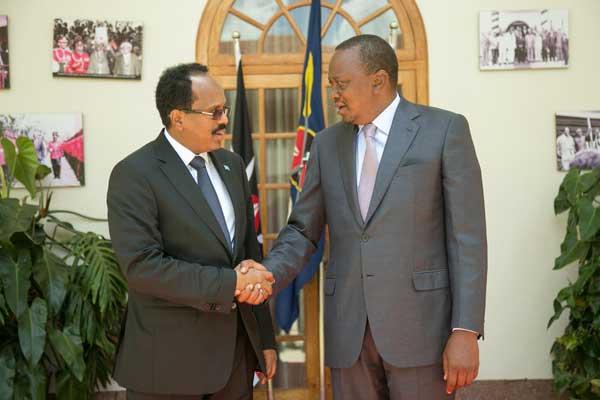 On April 7, 2009, Kenya and Somalia signed an MoU granting each other a “No-Objection” in respect of submissions on their maritime border dispute. The submissions were filed with the Commission on the Limits of the Continental Shelf (CLCS), which was registered at the UN Secretariat.

But on August 28, 2014, Somalia reneged on the MoU and instituted proceedings against Kenya on the establishment of the single maritime boundary.

Kenya must now proceed on the firm foundation of Article 5 of the Constitution, where “Kenya” consists of the “territory and territorial waters on the effective date” of this supreme law. Article 238 defines national security as the “protection against internal and external threats to Kenya’s territorial integrity and sovereignty, its people, their rights, freedoms, property, peace, stability and prosperity, and other national interests”.

Kenya can no longer play the “good neighbour”. We should proclaim, in no uncertain terms, our intent to deploy the full array of Kenya’s instruments of national power to resolve the dispute. Kenya must indicate to both Somalia and any other international entity of its purposed unwillingness to engage in wishful diplomacy on a matter of existential nature.

I imagine the National Security Council is seized of its core mandate and has a robust strategy to protect and defend Kenya from external aggression and potential loss of territory from a self-aggrandising “hegemonic” and expansionist hostile neighbour that Somalia desires to become.

The strategy must maintain preponderance and, at the minimum, a balance of power in favour of Kenya, while communicating effectively the overriding strategic vision to the people of Kenya. It must serve as a deterrent to external actors, especially multinationals that seek oil blocks from Somalia.

The NSC must also purposely build and strengthen our bilateral security alliances with the United States, United Kingdom and Ethiopia.

Kenya has suffered from the spillovers of the 20-plus years of the collapse of Somalia, sacrificing its blood and sweat and single-handedly sponsoring the lengthy peace process that bore the Transitional Federal Government. The Al-Qaeda terrorist threat remains and, since October 2011, our soldiers have paid the ultimate price.

The NSC must develop robust intelligence estimates (IE) to verify ensuing regional geopolitics. How Kenya resolves the maritime border dispute with Somalia will implicate our resolution of the Ilemi Triangle and even Migingo Island.

Kenya and Ethiopia have an enduring December 27, 1963 Defence Pact. Both have suffered the long history of Somali irredentism. Somalia invaded Ethiopia in mid 1977 to annex Ogaden on ethnic and cultural grounds to create the Greater Somalia.

We can harness the “damage limitation policy” outlined in the 2002 Ethiopian National Security Policy and Strategy and make deliberate policy decisions to support the dismemberment of the Greater Somalia. It has demonstrated that through various wars. Kenya has long supported a unitary Somali republic; it’s time we changed tack and policy.

And what is the probability that the International Court of Justice will rule in favour of Kenya? Scholarly literature on settlement of maritime disputes, the UN Convention on the Law of the Sea (UNCLOS), and how the ICJ has ruled in previous cases in Africa indicate that the outcome may not favour Kenya.

There is nothing wrong with abandoning international agreements and memberships. And while war is not always a good thing, the enduring peace enjoyed in the world has come from military victories. Although diplomacy remains the key organising principle of Kenya’s regional posture, on this matter, it should be vacated.

The use of military force should top the decision matrix.

Dr Sagala (PhD) is a consultant on security and governance. [email protected] | MONDAY MAY 27 2019