ISRAEL: Foreign Ministry cartoon depicts Arab world as a man on a mule 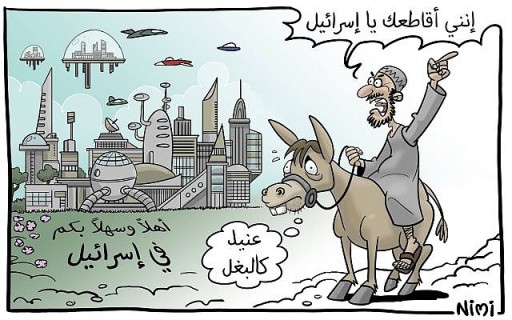 Slammed as ‘racist,’ caricature sought to convince readers to exit the ‘Middle Ages’ and cooperate with ultramodern Israel

The Foreign Ministry on Sunday published a cartoon in Arabic aimed at convincing readers that if the Middle East ceased its diplomatic boycott of the Jewish state, regional cooperation would lift the Arab world out of the “Middle Ages.”

The cartoon, which depicts Israel as a futuristic city with flying cars and the Arab world as a stubborn man on a mule, was criticized as “racist.”

“As the English saying goes, if you can’t beat them, join them. The time has come for cooperation between Israel and its neighbors in order to build a bright future for the countries of the region instead of the boycott and remaining in the Middle Ages,” said a post published along with the cartoon on the ministry’s official Arabic Facebook page.

“The precursor to change in the Middle East will come through realizing that relations with Israel will be beneficial for Arab countries,” the post added.

The cartoon depicts an Arab man on a mule angrily declaring “I boycott you Israel.” The mule, in a play on words, tells the boycotter that he is  “as stubborn as a mule.”

The other half of the cartoon shows a futuristic metropolis underneath which is written, “Welcome to Israel.”

The post concluded with research asserting that 50 percent of people in the Middle East don’t object to normalizing relations with Israel if it comes with benefits.

It was apparently a reference to a recent Israeli online poll purporting to show Arabs’ increasing desire for their governments to establish ties with Israel.

That poll, commissioned by the Foreign Ministry, was criticized by experts for its methodology. Still, Prime Minister Benjamin Netanyahu, who is also the foreign minister, has been touting its findings in various forums, including at a recent event during which he said Israel’s Arabic social media strategy has been winning hearts and minds among Arabs all over the Middle East.

“A despicable caricature of Arabs from the Israeli Foreign Ministry in Arabic,” the lawmaker tweeted, calling the cartoon as an “anti-Semitic” depiction of Arabs.

Dr. Assaf David, the academic director of the Forum for Regional Thinking think tank, said in a Facebook post that when Arab media publish “similar caricatures about Jews, ‘research institutes’ and the foreign ministry cry foul and anti-Semitism.”

“A model of diplomatic finesse. Now the Arabs will be convinced!” he added sarcastically.

The Foreign Ministry declined to immediately comment on the criticism of the cartoon.

ISRAEL: Foreign Ministry cartoon depicts Arab world as a man on a mule