Ethiopia and her history of the Horn: Which Way to the Sea, Please? 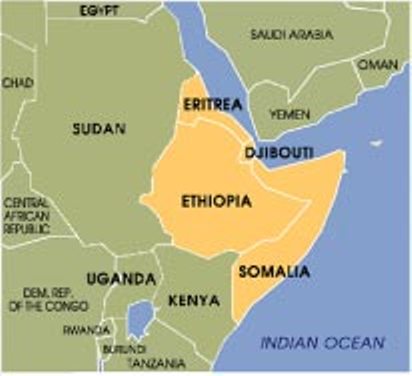 Which Way to the Sea, Please?

With a resurgent Ethiopia, integration of the Horn of Africa, and renewed Ethiopian desire for access to the Red Sea and the Indian Ocean with navy forces and naval bases on the headlines, we look back at history, the history  of Ethiopian Kings and Emperors to establish access to Somalia seas and their failures thereon.

But let us stay with Menelik. Stand warned and firm: don’t ever be surprised by Menelik who writes, “Formerly, the boundary of Ethiopia was the sea … our frontiers on the sea coast fell into the power of the Muslims.”

We shall note one thing: that at this stage, the sea remains so far unnamed, the coast as well. The boundary of Ethiopia was the sea. When? What sea? And when did the frontiers of Ethiopia (if even we accept the concept as Menelik had), specifically the frontiers on the sea, fell into the power of the Muslims? But who are the pagans that surround him? The Somalis? The Gallas) The Eritreans? And had he considered it his duty as a Christian to carry the pharos of Jesus Christ to the heathen peoples of the coast? I am afraid we shall have no answer from him. But we have this; we have a mention of intentions; we have Menelik’s word for it:

Eritrea or the Benadir coast. Ethiopia lusted after any coast, any water-way, be it the Somali coast, the Eritrean, Lake Nyanza (Victoria) or the Nile. Year after year, whether men or governments change, whether the claims are altered, Ethiopia needs a coast, a watery expanse – however contradictory the claims, however unconfirmable the dates they offer. Nothing. Promise after promise. No progress. Negotiations after negotiations. No port. In fact, Ethiopia is herself an Italian colony. We are in the second World War. Italy is on the losing side, and Haile Sellassie has enlisted the help of Britain whose Royal Air Force showers leaflets of propaganda proclamations on the Italian colonies. We read:

I have come to restore the independence of my country, including Eritrea and the Benadir whose people will henceforth dwell under the shade of the Ethiopian flag.

In this struggle, We are neither alone nor without arms. We have the help of Great Britain, therefore I summon you to strive to deliver yourselves from the alien slavery …

Eritrean soldiers in the ranks of Italy, do not fire a single shot against the British who come to help us.

Will Mengistu request the Russians and Cubans to take the ports of Zeila and Berbera, keep them for themselves or give them up to Ethiopia? Russia would certainly love to take full possession of the port of Berbera again.

In the meanwhile, the war goes on. And the world looks on with sufficient indifference.

Which Way to the Sea, Please?