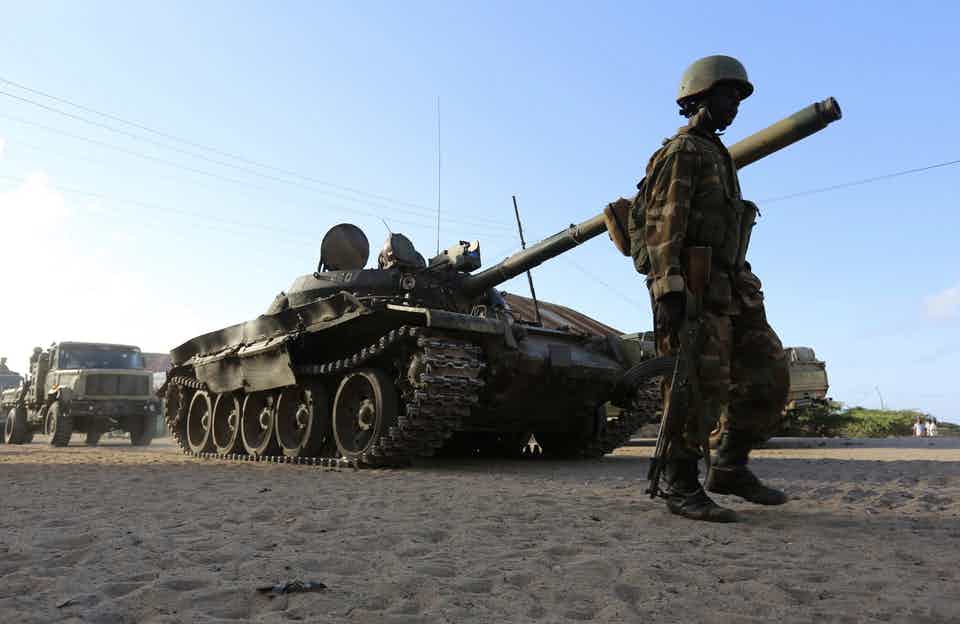 Somali soldiers and peacekeepers from the AU Mission during an operation in 2014. Reuters/Feisal Omar

To understand why states provide peacekeepers to multilateral operations I recently analysed what motivated states to join the African Union Mission in Somalia. The mission was deployed to Mogadishu in March 2007 and has been fighting al-Shabaab militants for more than 10 years. It has become the African Union’s longest running, largest, most costly, and most deadly operation.

The mission and its partners are currently debating how to transfer its security responsibilities to local Somali forces.

Research conducted as part of a project that analyses the effectiveness of peace operations suggests the decisions about deployment were based on the interplay between five sets of factors: political, security, economic, institutional and moral.

The decision was political when countries sought to enhance their prestige, reputation, and influence or in response to pressure or persuasion by external actors. Security concerns were behind the decision to act if national, regional or global threats are at play. Economic factors included financial benefits or losses to government. And countries might also have deployed peacekeepers to boost their security sectors. The intended benefits included improved reputation, operational experience and assistance packages.

Finally, countries might act to meet ethical commitments to promote peace or assist people caught up in war.

To establish why the six countries deployed troops to Somalia I examined the story behind each government’s decision. My conclusion is that there was no single or uniform explanation. And that there was often a mismatch between the most common public justifications and what I suspect were the main drivers of the deployments.

Mismatch between official positions and reality

The official justifications for joining the mission were usually that events in Somalia posed a direct security threat. Moral commitments to African solidarity to help fellow Africans in distress were also invoked. But these justifications were often less important than other unacknowledged or downplayed factors.

These included that the mission delivered a number of benefits to countries that contributed troops. For example, their armed forces were strengthened. Or there were political advantages relating to international prestige and external partnerships. There was also economic support for the domestic security sector.

These factors all played a role in the decisions taken by Uganda, Burundi, Djibouti, Kenya, Sierra Leone and Ethiopia to join the AU mission.

Of course, the mission helped alleviate some regional security concerns. But the tangible benefits for the troop-contributing governments and their militaries were often more important.

Overall, the most important motive was institutional. The next was enhancing national reputation and key political relationships. Third were the economic benefits. In the initial decision these factors were consistently more important than dealing with direct threats to national security and commitments to restoring peace or solidarity.

Gaining access to external sources of finance was also a crucial part of explaining why the countries contributed troops. This includes Kenya and Ethiopia. They initially conducted unilateral interventions into Somalia, mainly for reasons of national security. But they then joined the AU mission largely because of financial concerns.

It also points to a limitation of AU peace operations. That they require financial support from donors can make them a less attractive option than providing peacekeepers to UN missions. UN missions come with a reliable system of financing for personnel and contingent owned equipment.

In sum, joining the mission brought important material benefits for the governments and their armed forces. But there were other benefits too. For Burundi and Sierra Leone, the deployments were a crucial part of professionalising and forging new identities for their post-civil war militaries.

But, because they couldn’t control the military forces receiving the money, the donors faced a number of risks. These included operational risks – that the peacekeepers may under-perform as well as the economic risk that resources might have been used more effectively. There were also inherent political risks to the donor’s reputation if the peacekeepers behaved badly while on mission. Or if troops were involved in oppression in their home countries.

The political risks did in fact materialise. AU peacekeepers were accused of misconduct. This included indiscriminate use of force against civilians, illicit commerce and sexual exploitation and abuse. There were also political tensions between donors and Uganda and Burundi when soldiers were involved in oppression back home. Nevertheless, joining the Somalia mission sometimes helped authoritarian regimes deflect more severe criticism.