Turkey to help in the reconstruction of Somalia’s postal service 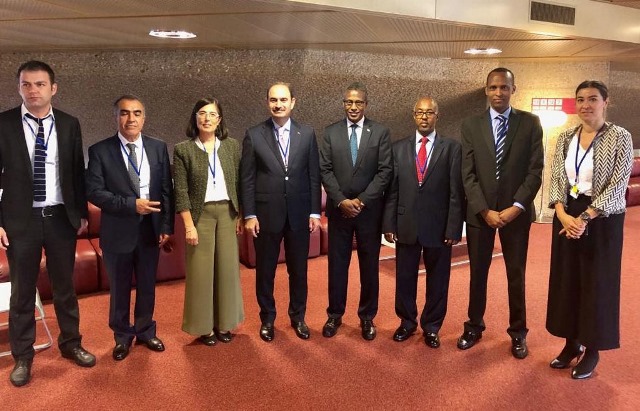 (Geneva, September 28, 2019) Somalia’s Minister of Post, Telecom and Technology, H.E. Abdi Ashur Hassan, officially requested Turkish Post to help in the reconstruction of the country’s postal service that was completely destroyed during the long civil strife.

During a meeting in Geneva with the Turkish delegation led by Mr. Kenan Bozgeyik, Chairman of Council of Administration of the Universal Postal Union (UPU) and Chairman & Director General of Post and Telegraph Corporation of the Republic of Turkey, the Minister thanked the Government of Turkey for their continued support to Somalia since 2011.

The Minister said his request was justified by the trust Somali people have in Turkish people and their Government as a result of the development projects they have undertaken since 2011, which have changed Somalia’s social and economic situation remarkably. The Minister expressed confidence that restoration of postal service would be another area where their success story can be replicated.

“We are now back to UPU family following the lifting of sanctions and we voted for the first time in three decades. However, running an operational postal service needs tools, training and connection to the world. We hope our Turkish brothers and sisters can help us in this regard,” said the Minister.

“After setting up the ICT sector, the postal service is our next priority because it facilitates the digital economy by supporting ecommerce, providing financial inclusion and bringing e-government services closer to the citizens,” concluded the Minister.