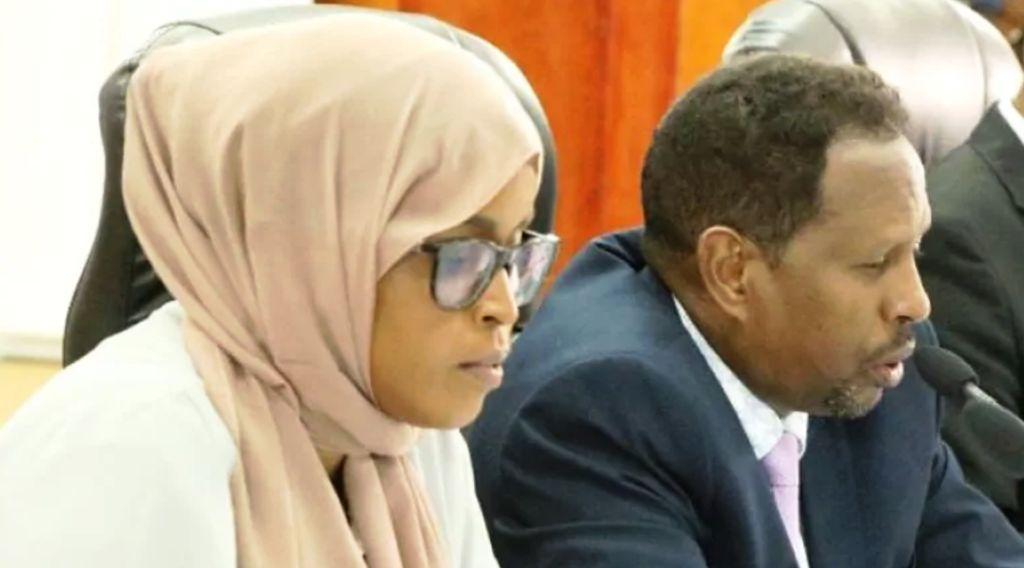 Hodan Ali, left a Canadian nurse-practitioner, and Abdirahman Omar Osman, the late mayor of Mogadishu who died Aug. 1 from wounds sustained in a suicide attack. (Submitted by Hodan Ali)

Hodan Ali had just left the mayor’s office in Mogadishu to get some coffee and a bite to eat when a suicide bomber detonated an explosive device.

Six people were killed in the July 24 blast in Somalia’s capital city, and Mayor Abdirahman Omar Osman was critically wounded. He died in a Qatar hospital on Aug. 1.

The militant group al-Shabaab has claimed responsibility for the attack. The bomber is believed to be a woman who had been working on disability rights from the mayor’s office.

Ali, a Somali-Canadian nurse practitioner, left her family in the Ontario city of Hamilton three years ago and moved to Mogadishu in hopes of making a difference. She was both a friend and colleague of the mayor, advising him on issues of poverty and health care.

She spoke to As It Happens guest host Piya Chattopadhyay about the attack. Here is part of their conversation.

How did you learn about the attack?

I had just arrived at a place where I was having a coffee and some snacks … and a friend of mine who was sitting next to me just said, “The municipality has been bombed and the mayor is injured.”

I was like, “What? That’s not possible. I just came from there.”

How close of a call was this for you?

Extremely close. We had just spent the entire morning and early afternoon conducting a meeting with the new secretary general representative to Somalia, UNSOM [United Nations Assistance Mission in Somalia].

After that meeting is when I had gone to the coffee shop I mentioned, and that’s where I learned of the tragedy.

James Swan, head of the UN mission in Somalia, left, stands alongside Ali, centre, and Osman, right. This photo was taken hours before the deadly attack at the mayor’s office. (Submitted by Hodan Ali )

What do you know about the alleged attacker?

She was, by all accounts, not a suspect to anyone. Blind young woman. Extremely articulate, intelligent young woman who was a passionate advocate for those disabled. And her office was next to mine.

She and I had engaged several times.

The mayor appointed her as a director for disability in the region. By all accounts, this was not someone that you ever expect to commit such atrocity. But, you know, that’s who is suspected to have carried out the attack.

Given what you’ve just said … why do you think she may have done this?

I don’t think there’s any way of comprehending. But from what I’ve seen, and what I do see, are youth who’ve been brainwashed into thinking what they’re doing is somehow religiously viable, and that they are killing in the name of Islam. But truly, it is the most un-Islamic act to take the life of an innocent human being.

There’s many layers to why young people join these extremist elements —  in particular, post-conflict, very fragile, economically disadvantaged youth. Particularly, she’s of someone with disability. She probably faced a lot more challenges.

But it also speaks to the fact that we’re not doing enough to gain back the trust and the confidence of the youth, and they are able to fall prey to ideologies that are such against humanity, and I think this demonstrates how deeply rooted this problem is.

Tell me about Mayor Osman. What was he like? And what does his death mean for Mogadishu and Somalia?

Mayor Osman was also known as Engineer Yarisow. He was, you know, the youngest in his engineering class, and the term yarisow indicates sort of someone of a small, petite figure, but also in age much younger than his classmates.

He was a true patriot, very dedicated to this country, came back from the diaspora as well. He lived in the U.K., raising a family, chose to come back to Somalia to be part of the rebuilding.

An amazing human being, compassionate, patient, very humble. But really invested in seeing Somalia beat this evil of terror. Actively advocated against violent extremism and did everything he could.

In terms of for the city, it’s a great loss. I think Mogadishans feel orphaned today.

You mentioned that he had moved abroad and come back to help improve life in Somalia — and so have you and so many other Somalis who have left your home country, and gone abroad and have gone back. Why has it been so important for you to move to Somalia?

I think, like many others who left and have come back, there’s a sense of duty, a sense of honour, wanting to come back and contribute to improve the conditions of millions, whichever little small contribution we can all make.

Recently, we also lost a Canadian journalist, Hodan Nalayeh, who chose to come back, who was a good friend of mine.

I think there’s a calling for some of us who have been blessed to either live in Canada or in the United Kingdom, and benefit from that privilege of being a Canadian or a Brit, with all the education, all that life has given us, the opportunity, and want to share that and contribute that to the resurgence of Somalia. You know, to make it a place where all of us in the end, if we wanted to come back permanently, can live.

And I think Mayor Yarisow was really was passionate about that. He always talked about wanting his children to return to a safer, more habitable Somalia. I think most of us have that feeling.

It’s a passion. It’s a calling. Not everybody does it. But for those of us like myself —  Hodan, Mayor Yarisow, may they rest in peace — choose to come back, you know, knowing the dangers that are ahead. But it’s something that is deeply rooted to who we are.

You’ve lost two good friends in the last month. We spoke to you back in 2017 after another attack in Somalia left [nearly] 600 people dead. We know that Somalia has great things, but it also can be quite a dangerous place. I’m wondering if you’re thinking about leaving and how fearful you are for your life?

Am I scared? Absolutely. Am I considering to leave? Yes. I haven’t made that final choice yet, but that is something very real. I have a family, and they constantly have been on the phone asking me to leave, and at minimum take a break.

We all come back knowing that Mogadishu is a dangerous place. But this attack is different from all the others. And the place where we feel more secure has been violated.

You have three children who live in the West. You are Canadian. And you said [you’re] mulling over whether to stay in Somalia or whether to leave. How do you even make that decision?

It’s not an easy decision. Like I said, you know, three kids, a husband, mom, sisters, friends who are desperately worried about me, and I absolutely understand that.

And then there’s also the part of me that’s been here for such a long time that sees the need not to leave — because if people like me leave, it just leaves, you know, that space for others to fill in, that vacuum. And we lose the bigger picture.

Written by Sheena Goodyear. Interview produced by Sarah Jackson. Q&A has been edited for length and clarity.