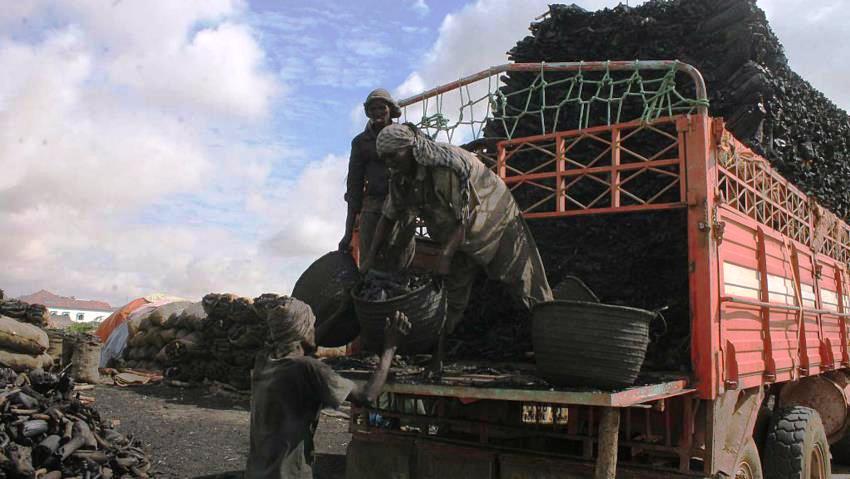 Since the inauguration of the Federal Government of Somalia (FGS) in 2012, the United Arab Emirates has increasingly vied with other regional powers for influence in the country, investing in infrastructure, and bolstering the country’s military capabilities.

The UAE opened a military training facility in Mogadishu in 2015 to train members of the Somali Armed Forces, and a Dubai-based firm has managed Mogadishu’s Aden Adde International Airport beginning before the government transition.During the massive Mogadishu truck bombing in October 2017, it was widely reported that the UAE promised to treat 100 injured civilians. The country responded by sending a flying hospital, and provided additional support to orphaned children through the Emirates Red Crescent.

Yet, the UAE’s continuing participation in an illicit Somali charcoal trade undermines these positive contributions.

For years, the UAE has been cited as the primary destination for the illicit charcoal trade coming from Somalia over the years, and has been implicated in the recent formalisation of the trade, which has persisted since the inception of the FGS, documented by the United Nations Monitoring Group on Somalia and Eritrea.

In 2011, al-Shabaab controlled much of southern Somalia, and was estimated to receive between $70 million and $100 million annually through taxation and extortion in the area, including of illegal charcoal exports, which posed a major challenge for the incoming government.

Recognising the charcoal trade’s role in financing al-Shabaab, the UN issued called for a total ban on charcoal exports from Somalia in 2012 (resolution 2036).

That year, as the FGS attempted to consolidate territorial control, militia leader Ahmed Madobe led a paramilitary group against al-Shabaab in in the Battle of Kismayo (fought over the southern port city of the same name).

Madobe’s group assisted the Kenyan Defense Forces (KDF) in taking the strategically important port, before it later reverted back to al-Shabaab control.

The FGS continues to operate against a dense network of many fractious interests in its attempts to gain and hold territory and domestic legitimacy. Below the surface of international mandates and public relations campaigns, the illicit charcoal trade has continued unabated.

Madobe became President of the interim Juba administration which contained Kismayo, in 2013.

His rise to power coincided with the tenure of a locally operating tax collector for al-Shabaab with deep involvement in the charcoal trade, named Ali Ahmed Naaji.

In November, 2015, the group Journalists for Justice published a report implicating members of the KDF (who controlled the Kismayo port along with Jubaland forces), in a charcoal and sugar smuggling operation along with the interim Juba administration and al-Shabaab. 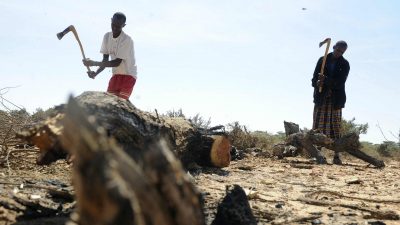 Hassan Hussein and Abdi Musa cut down a tree to make charcoal in the village of Jalelo, Hargeisa. In Somalia cutting down trees for the charcoal industry risks turning the terrain to desert [AFP]

Toward the end of 2015, al-Shabaab briefly changed its strategy, attacking and punishing associates of the charcoal trade, as importing countries including the UAE improved enforcement of the charcoal ban.

The Monitoring Group noted “as a result of improved charcoal ban enforcement by the United Arab Emirates, dhows [traditional ships] became reluctant to load charcoal in Kismayo and Buur Gaabo in May 2016”.

In Somalia, the combined restrictions on the 2016 charcoal trade hampered a key revenue stream of the interim Juba administration. The Monitoring Group cautioned that the Juba administration’s reliance on charcoal export revenue, extracted through checkpoints and tax applied at the port, jeopardised its ability to pay police forces, putting them at risk of defecting to al-Shabaab.

This adverse impact of enforcing the ban highlights the complexity of alliances and power dynamics and explains short term incentives around maintaining the status quo on all sides. UAE enforcement of the ban was short-lived, and by the end of 2016, al-Shabaab had reverted to taxing the trade.

Ali Ahmed Naaji, previously tax collector for al-Shabaab, would become financier of the Jubaland Chamber of Commerce in 2016, and join an alliance called the All Star Group, also known as the All Star Trading Company, which, today, says the report, “comprises the main illicit charcoal suppliers, traffickers and investors in Kismayo and Dubai”.

Multiple, unconfirmed reports have indicated that a revenue sharing agreement exists between the All Star Group of suppliers and traffickers, and al-Shabaab.

The Monitoring Group has also reported that Naaji “received death threats from the Amniyat [an elite branch of al-Shabaab] demanding a resumption of charcoal revenue sharing”. Last month, the KDF disputed photographic evidence implicating its members in continued involvement. 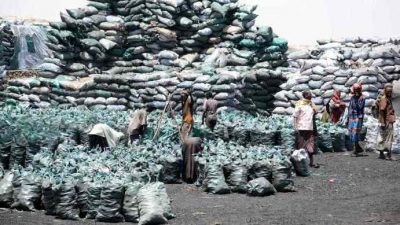 The stakes in illicit charcoal for the UAE remain high relative to their risk.

Perhaps that is why the Monitoring Group has reported that over the past year, transnational criminal networks operating in Somalia and the UAE “may have assumed a more formal structure”. Today, al-Shabaab systematically taxes charcoal between stockpiles and ports at Kismayo and Buur Gaabo further south.

“A conservative estimate suggests that al-Shabaab receives at least $10 million each year from the illicit charcoal trade. Dubai, United Arab Emirates, continues to be the primary export destination as well as a hub for criminal networks that violate the charcoal ban with near impunity.

“The United Arab Emirates, particularly Port Al Hamriya in Dubai, continues to be the principal destination for illegal exports of charcoal from Somalia.”

In this scenario, the UAE is primarily responsible for generating the demand fuelling Somalia’s illicit charcoal trade.

If the UAE is genuinely supportive of development and security in Somalia, it should enforce the charcoal ban and eliminate a crucial revenue source for al-Shabaab.

The UAE should consider options to support Somalia’s federal government to alleviate pressure on the Juba administration and upset the ossified incentive structures that promote the illicit trade, and therefore finance al-Shabaab, rather than contribute to the trade’s formalisation.

The illicit trade is one thread in a complex web that perpetuates al-Shabaab’s entrenchment. For the cost of contributing to al-Shabaab’s destructive presence, the UAE can afford to get its charcoal elsewhere.

Rose Worden is a researcher and writer based in New York. She holds a Master’s Degree in International Affairs from The New School and is focused on development and security in the Horn of Africa and MENA.