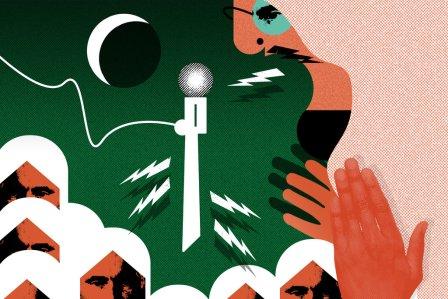 In the aftermath of the Jamal Khashoggi murder, the kingdom has exploited the podium of the Grand Mosque in Mecca by using its imams to praise, sanctify and defend the rulers and their actions.

The rulers of Saudi Arabia derive much of their legitimacy and prestige in the Muslim world from their control and upkeep of the Grand Mosque and the Kaaba in Mecca and the mosque of Prophet Muhammad in Medina. King Salman, like the rulers before him, wears the title of the “Khadim al-Ḥaramayn as-Sarifayn,” which is translated as the “Custodian of the Two Holy Mosques” or, more precisely, “The Servant of the Two Noble Sanctuaries.”

Despite the humility of the royal title, the Saudi monarchy has a long history of exploiting the podium of the Grand Mosque in Mecca by using its imams to praise, sanctify and defend the rulers and their actions.

In the aftermath of the murder of the journalist Jamal Khashoggi, as the world’s accusatory gaze was transfixed on Prince Mohammed bin Salman, the Saudi monarchy has again used the Grand Mosque to defend and deify the crown prince in a manner that makes its legitimacy and control of Mecca and Medina morally troubling like never before.

On Oct. 19, Sheikh Abdulrahman al-Sudais, the officially appointed imam of the Grand Mosque and the highest religious authority in the kingdom, delivered his Friday sermon from a written script. Friday sermons at the Grand Mosque are broadcast live on cable networks and social media sites, watched with great reverence by millions of Muslims and carry a great deal of moral and religious authority.

Imam Sudais delivered a troubling sermon, violating the sanctity of the sacred space he occupied. He referenced a saying attributed to Prophet Muhammad that once every century, God sends a mujtahid, a great reformer to reclaim or reinvigorate the faith. He explained that the mujtahid is needed to address the unique challenges of each age.

He proceeded to extol Prince Mohammed bin Salman as a divine gift to Muslims and implied that the crown prince was the mujtahid sent by God to revive the Islamic faith in our age. “The path of reform and modernization in this blessed land … through the care and attention from its young, ambitious, divinely inspired reformer crown prince, continues to blaze forward guided by his vision of innovation and insightful modernism, despite all the failed pressures and threats,” the imam declared, from the podium where Prophet Muhammad delivered his last sermon.

Invoking the debate following the Khashoggi murder, Imam Sudais warned Muslims against believing ill-intended media rumors and innuendos that sought to cast doubt on the great Muslim leader. He described the conspiracies against the crown prince as intended to destroy Islam and Muslims, warning that “all threats against his modernizing reforms are bound not only to fail, but will threaten international security, peace and stability.”

He cautioned that the attacks against “these blessed lands” are a provocation and offense to more than a billion Muslims. Imam Sudais used the word “muhaddath,” or “uniquely and singularly gifted” to describe Prince Mohammed. “Muhaddath” was the title given by Prophet Muhammad to Umar Ibn al-Khattab, his companion and the second caliph of Islam. The imam implicitly compared the crown prince to Caliph Umar.

Imam Sudais prayed for God to protect Prince Mohammed against the international conspiracies being woven against him by the enemies of Islam, the malingerers and hypocrites, and concluded that it was the solemn duty of all Muslims to support and obey the king and the faithful crown prince, the protectors and guardians of the holy sites and Islam. 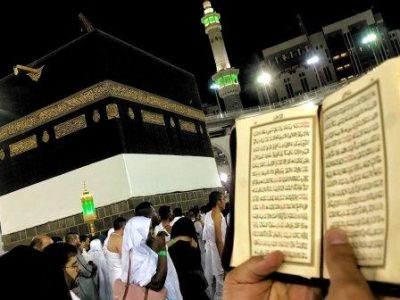 Muslim Hajj pilgrims circumambulate around the Kaaba, Islam’s holiest site, located in the center of the Grand Mosque in the holy city of Mecca, Saudi Arabia.CreditMustafa Ciftci/Anadolu Agency, via Getty Images

Saudi clerics had never weaponized the podium of the prophet at the Grand Mosque so brazenly to serve the monarchy. No imam of the Grand Mosque had ever anointed a Saudi ruler as the mujtahid of the age or dared to imply as much.The sermons in Mecca and Medina are read from a script, which is approved beforehand by Saudi security forces. While the king appoints a leading imam for the Grand Mosque and the Prophet’s Mosque in Medina, each imam has a number of officially appointed deputies who rotate in leading prayers and delivering sermons.

For decades, the sermons delivered in Mecca and Medina have been pietistic, dogmatic and predictable. They have always concluded with a prayer for the Saudi royals, but the imams would not attribute sacred qualities to the monarchy and insisted that the rulers should be obeyed only to the extent that they obey God.

A lot has changed since Prince Mohammed’s rise to power. The crown prince has imprisoned hundreds of prominent Saudi imams who have shown even a modicum of resistance — including very prominent and influential jurists such as Sheikh Saleh al-Talib and Sheikh Bandar Bin Aziz Bilila, former imams of the Grand Mosque. Saudi prosecutors have sought the death penalty for Salman al-Awdah, a prominent, reformist cleric who was arrested last September. Some reports claim that another prominent cleric, Sheikh Suleiman Daweesh, who was arrested in April 2016, has died in a Saudi prison after being tortured.

The only imams who seem to be allowed to lead prayers and give sermons at the Grand Mosque in Mecca and the Prophet’s Mosque in Medina are those who have agreed to go along with whatever the crown prince wants. Some influential Saudi scholars such as Sheikh Abd al-Aziz Al Rayes went as far as saying in a lecture that even if the Saudi ruler “fornicates in public on television for half an hour each day, you are still required to bring people together around the ruler, not to aggravate people against him.”

Imam Sudais’s recent sermon put Muslims at an axial turning point: Accept the crown prince as the divinely inspired reformer of Islam and believe and accept his words and deeds or you are an enemy of Islam. Muslim scholars reacted to the sermon primarily on social media with disdain and outrage. Numerous Arabic language comedy shows and talk shows on YouTube reacted with mockery and condemnation.

When an imam of the Grand Mosque calls upon Muslims to obediently accept Prince Mohammed’s incredulous narrative about the murder of Mr. Khashoggi; to accept his abduction, jailing and torture of dissenters, including imprisonment of several revered Islamic scholars; to ignore his pitiless and cruel war in Yemen, his undermining the democratic dreams in the Arab world, his support for the oppressive dictatorship in Egypt, it makes it impossible to accept the imam’s categorization of the crown prince as a divinely inspired reformer. The sanctified podium of the prophet in Mecca is being desecrated and defiled.

The control of Mecca and Medina has enabled the clerical establishment and the monarchy flush with oil money to extend their literalist and rigid interpretations of Islam beyond the borders of the kingdom. Most Muslims will always prefer a tolerant and ethically conscientious Islam to the variant championed by the crown prince and the acquiescent Saudi clergy.

By using the Grand Mosque to whitewash acts of despotism and oppression, Prince Mohammed has placed the very legitimacy of the Saudi control and guardianship of the holy places of Mecca and Medina in question.

Khaled M. Abou El Fadl is a law professor at the University of California, Los Angeles, and the author of “Reasoning With God: Reclaiming Shari‘ah in the Modern Age.”