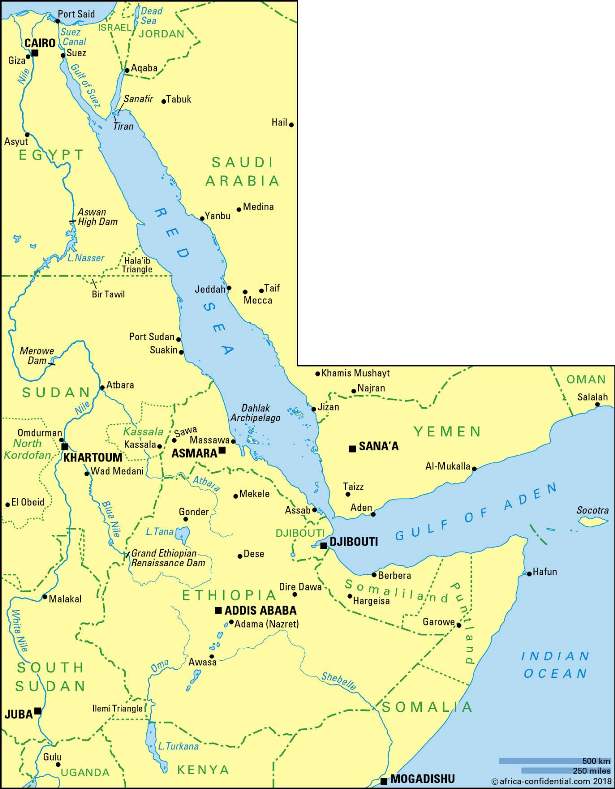 Two Middle Eastern power blocs are buying friends and influence in the Horn but further damaging prospects for stability there.

Saudi Arabia’s and the United Arab Emirates’ military dealmaking in the Horn of Africa is flurry of diplomatic missions and in-camera meetings at the African Union about tensions triggered by the growing foreign military presence in the Horn. Gulf states see the area bordering the Red Sea and the Gulf of Aden as their sphere of influence, militarily and commercially.

Now the conservative Gulf monarchies, Saudi Arabia and the UAE, in alliance with Egypt, are boosting their presence in the Horn as part of their competition with Qatar and Turkey, whom they lambast as leading supporters of the Muslim Brotherhood and its affiliates in the region. The immediate reason for Saudi Arabia and the UAE striking a series of military cooperation deals with Eritrea, Djibouti, Somaliland and Somalia was to strengthen their position in the civil war across the Red Sea in Yemen.

Saudi Arabia and the UAE’s campaign against the Iranian-backed Houthi rebels in Yemen has been going badly. They want to use bases in the Horn in support of their bid to take control of the Yemeni coastline, cut the rebels’ supply lines, and intensify aerial and naval attacks from the south. Eritrea, Somalia and Sudan all have troops fighting alongside Saudi Arabia in Yemen.

Sudan, whose Islamist regime under President Omer Hassan Ahmed el Beshir has been trying to suppress protests about rising food prices, is struggling to maintain functional relations with both the Saudi and Qatari blocs. Khartoum is in a serious dispute with Egypt over the Hala’ib Triangle, a 21,000-square-kilometre area both countries claim (AC Vol 54 No 25, Cape to Cairo, again).

In the 1990s, Egypt deployed its military in the triangle. There the issue might have rested, had not Cairo come to an agreement with Saudi Arabia to hand over two Red Sea islands, Tiran and Sanafir (AC Vol 57 No 14, Red Sea wrangles). The agreement, which caused nationalist fury in Egypt, also redrew the maritime border between the two countries and unilaterally imposed Egyptian sovereignty over the Hala’ib Triangle. Sudan reacted in December last year, sending a letter to the United Nations rejecting the deal and recalling its ambassador to Cairo.

Meanwhile, Ethiopia is racked by dissent among its nationalities, its leaders divided over
how many of its thousands of detainees to set free. Eritrea is wrestling with an exodus of
young people desperate to escape the notoriously repressive conscription regime. Into this
morass have stepped Saudi Arabia and the UAE as they seek regional political, military and
diplomatic support for their war in Yemen against the Houthis.

The biggest beneficiary of the conservative Gulf Arab alliance has been President Issayas
Afewerki, who has gained an unexpected lifeline in return for providing logistical facilities.
This is a blow to Ethiopia, Djibouti and Somalia, which had previously succeeded in
isolating Eritrea and preventing it from meddling in their internal affairs, mainly through a
UN arms embargo and a limited sanctions regime in place since 2009.

Asmara Airport has been renovated and the Eritrean port of Assab is now a military base
leased to the Saudis and the UAE from which they prosecute their war in Yemen. The UAE
has taken Yemeni prisoners to Assab to be interrogated and tortured, according to human
rights activists. Eritreans in Yemen report the presence of up to 400 Eritrean troops fighting
alongside the Saudi-led alliance.

It was against this background that Issayas went on a two-day visit to Egypt on 9-10 January.
His talks with President Abdel Fattah el Sisi are reported to have centred on economic ties
and what were described as ‘regional and international topics of mutual importance’.
Communiqués spoke of a mutual interest in a bilateral strategic partnership. The cementing
of its relationship with Egypt is one of the biggest rewards for Asmara for accommodating
the Gulf regimes.

For Egypt, there is potential profit in Asmara’s fierce enmity with Ethiopia, whose Grand
Ethiopian Renaissance Dam (GERD) is causing Cairo deep concern. The flow of the Nile into
Egypt – source of nearly all its water – could be reduced, depending on how quickly
Ethiopia decides to fill the 10.74 billion cubic-metre reservoir for the still uncompleted dam
(AC Vol 58 No 3, Eritrea’s unsettling alliance). Egypt is belatedly attempting to make up some
of the expected deficit by commissioning a desalination plant, but this is expensive
technology and it will take years to build.

Egypt has used Eritrea as a strategic counterbalance to Ethiopia since the 1950s. It hosted
the Eritrean Liberation Movement, the precursor of the guerrilla groups which eventually
expelled Ethiopia and established Eritrea as an independent state in 1993. In recent years
Ethiopia has accused Eritrea of hosting rebels bent on attacking the GERD. In March 2017
Ethiopia said Eritrea was behind an unsuccessful attempt by the Benishangul Gumuz
People’s Liberation Movement to raid the dam. Eritrea denied the accusation. Later that
year 150 members of the same group defected to Ethiopia and accused the Eritreans of
instructing them to sabotage the dam.

On the day of the Issayas/El Sisi meeting, the Qatar-based Al Jazeera television news
channel claimed that Egypt had ‘sent hundreds of its troops to a UAE base in Eritrea, on the
border with Sudan’. The channel said the deployment was a response to Turkey expanding
its influence in the region by establishing a military base at the ancient Sudanese port of
Suakin, even though the UAE base in Assab is 700 kilometres from Sudan as the crow flies,
and much further by road.

A pro-Muslim Brotherhood media outlet, the London-based Middle East Monitor, went
further, alleging that Egypt was training Eritreans at its military academy at Sawa, close to
the Sudanese border. These reports were dismissed by the Eritrean Minister of Information,
Yemane Gebremeskel, who tweeted: ‘Al Jazeera News Channel seems to relish propagating
false and preposterous news on Eritrea.’ Al Jazeera is caught up in Doha’s larger struggle
with Saudi Arabia, which included scaling back the television channel among its 13
demands on Qatar when it launched its dispute with Doha last June.

Sudan is navigating these competing blocs. Omer believes he faces a threat from Eritrea. In
late December, he declared a six-month state of emergency in the state of North Kordofan
and in Kassala, which borders Eritrea. Early in January hundreds of Sudanese troops
together with military vehicles and tanks were reported passing through the town of
Kassala en route to the Eritrean border. The manoeuvres were said to be designed to
counter smuggling and human trafficking; this is hardly plausible, since the border region
has been used for such practices for decades, with officials on both sides implicated in the
trade.

Meanwhile, Ethiopia tries to mitigate the threats it faces from a resurgent Eritrea and its
heavyweight allies. Ethiopian Prime Minister Hailemariam Desalegn met the Sudan
Armed Forces Chief of General Staff, Lieutenant-General Emad el Din Mustafa Adawi, on 8
January. Workneh Gebeyehu, Ethiopia’s Foreign Minister, has held meetings with the UAE’s
Minister of State for International Cooperation, Reem bint Ibrahim al Hashimy, the
outcome of which is not known. Hailemariam also went to Cairo on 17 January to meet the
Egyptian President; the only topic publicly revealed to have been under discussion was the
GERD. At a joint press conference on 18 January, El Sisi declared his ‘profound concern’ at
the deadlock in the tripartite technical committee (also involving Sudan) studying the
impact of the GERD, while he and Hailemariam signed several memoranda of
understanding on other issues. On 29 January, on the sidelines of the African Union summit,
the leaders of Ethiopia, Egypt and Sudan discussed ways of cooperating and pledged to find
a peaceful and cooperative solution to the Nile dispute.

Somalia’s President Mohamed Abdullah Mohamed ‘Farmajo’, despite his country’s close
ties to Turkey and Qatar, tries to maintain good relations with Saudi Arabia and the UAE,
which help to finance his government. However, when the UAE signed an agreement with
Somaliland to open a military base in Berbera, Somalia still protested. And so far, Farmajo
shows no sign of bowing to Saudi Arabian pressure to break Somalia’s ties with Qatar.
What is apparent is that there is a new scramble for influence along the Red Sea. If the
reports of Egyptian troop deployments to Assab are confirmed, then Cairo will have joined
Saudi Arabia and the UAE in the Eritrean port. At the same time, Turkey is adding Sudan’s
Suakin to its base in Somalia and a possible base in Djibouti. Could Egyptian and Turkish
forces be drawn into the Yemeni civil war on opposite sides? The Horn of Africa is entering
a dangerous phase.