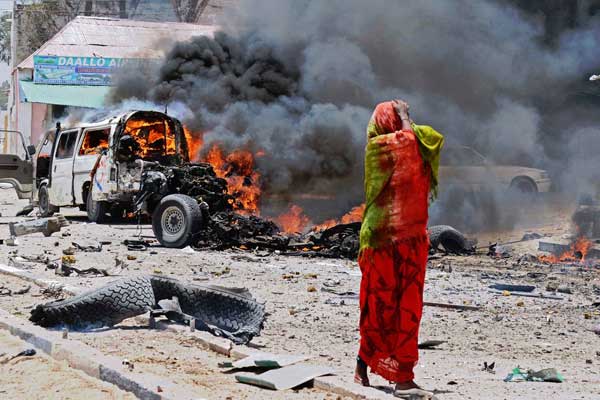 On the second day of my visit to Mogadishu within a couple of days of the truck bombing, I visited the site of the explosion in the company of Prof Abdullahi Shirwa, the chairman of the National Emergency Operation Centre.

At some point, a man explaining things to me glanced nervously around, and bent down to pick up “something”.

He said to me, “Here,” and offered me whatever it was that he had picked up from under a piece of wood.

I did not like his bothered look and I asked: “What is it?”

He replied: “These are pieces of human flesh.”

Shocked, I averted my eyes, unready to accept the man’s extended hand and was relieved when Prof Shirwa assured me that these were fragments of charred metal thrown out by the massive explosion.

Of the numerous assaults and the bomb attacks that will haunt every Somali’s mind, none has been dastardlier than the one on October 14.

A heinous act of incomparable devastation, nearly 400 lost their lives and an equal number of people suffered serious injuries, many needing major surgeries, with many others either unaccounted for or missing.

Al-Shabaab served notice on everyone that the terrorist organisation is still capable of striking panic into the nation’s heart, despite its territorial loss.

As we mourned the dead, we sought answers to the question we have been asking for the past decade.

Now we ask now if this would be the watershed event that would drive African Union Mission in Somalia and the national army towards the decisive final push to rid the country of Al-Shabaab once and for all.

Neither did Al-Shabaab, masters in dark arts of stonewalling, claim responsibility for the attack, fearing a popular backlash.

It is worth remembering that the terrorists did not own up to the December 4, 2009, Hotel Shamo blast in which a male suicide bomber disguised as a hijab-wearing woman detonated a device, killing three government ministers, two professors of medicine and nine students at a medical school graduation ceremony.

Even so, nearly everyone suspected them of being the perpetrators of the atrocity.

A Somali proverb has it that lies have short legs and that sooner or later the truth will catch up with them.

And so it is something of a relief when the truth has caught up with Al-Shabaab’s taciturnity.

The Somali Internal Security minister released the names of the six men behind the truck bombing a month after the deadly incident and two weeks following the Hotel Naasa Hablood assault, in which 17 people died and 23 were wounded and which Al-Shabaab claimed to have carried out.

The minister, Mohamed Abukar Islow, identified Osman Hajji, aka Maadey, as the suicide bomber and driver of the truck.

He also named five other individuals, who are now in custody, accused of having a hand in the bombing: Hassan Adan Isack, the driver of the second car; Ali Yussuf Wacays, aka Duaale, thought to be the second suicide bomber; Abdiweli Ahmed Dirie, aka Fanax, the group’s head of explosive experts in Mogadishu; Mukhtar Mohamed, also known as Gardhuub, a senior leader of the team; and Abdullahi Abdi Warsame.

The minister added: “Apart from those in custody, our forces are hunting down the owner of the truck who is on the run.”

Alone in my hotel room late that evening following my meeting with the Internal Security minister, his bodyguards hovering nearby, I remembered a conversation I had in London with a leading scholar on Jihad insurgency in Somalia.

My English friend said: “Do you know why the majority Muslim countries such as Somalia, Pakistan and Afghanistan serve as religious battlefields, when no majority Arab country has ever been torn apart by similar religion-based conflicts until ISIS appeared on the scene?”

“It is because Qatar, UAE and Saudi Arabia pay the wages of the Jihadist on the proviso that all the religious battles are fought elsewhere, away from their countries. (Osama) Bin Laden operated from his Afghan base until his stay in that country became untenable. Then he moved his base to Pakistan.”

“Where does Somalia fit in?” I asked. The analyst claimed that it all began when General Mohamed Farah Aideed met Bin Laden at the latter’s retreat home in Soba, an ancient Nubian city about 20 kilometres away from Khartoum.

In 1997, the leader of Al-Qaeda would later tell two CNN journalists that his men had trained the Somalis in downing Black Hawks by aiming at the tail rotors.

In the event, Bin Laden dispatched Abu Hafs Al Masri, an Egyptian, to provide on-the-ground training to Aideed’s militiamen on downing a helicopter.

When the two met, Bin Laden was living openly in Khartoum and putting together a plan to launch the attacks on the American embassies in Nairobi, Kenya; and Dar es Salaam, Tanzania, which followed before his men carried out the game-changing 9/11 assaults on the Twin Towers.

A lot has happened in Somalia since the Black Hawk Down days caused the United States to withdrew its army.

It seemed Somalis were left to their own devices to deal with the nefarious interference in the country’s affairs by Ethiopia, Kenya, Eritrea, Uganda, the US, the European Union and a handful of Arab states, each having its own self-serving design, some in an underhand way, others with worrying blatancy.

A rap sheet of crimes was committed against Somalia. The country’s wealth was looted, its seas emptied of fish, its shores polluted with nuclear and chemical waste and the chance of it putting a government together continuously sabotaged by one foreign party or another.

When I visited Mogadishu in 1996 after a 22-year exile, I found a divided city run by two warlords, each claiming his half as his fiefdom.

And with no government to provide any civic amenities and no state-run schools functioning, the Qataris, the Saudis and the Emirates entered Somalia, especially in the educational sector, as if to bring Bin Laden’s plans finally into fruition.

Under Siyad Barre, Somalia had been a secular state, quite unlike any other Muslim nation.

Now the Arabs had free rein to impose their language, harden the Somalis’ moderate way of worship and change the traditional manner in which our women and men dressed.

Unchallenged, the Saudis, the Qataris and the Emirates introduced their school curricula, which was adopted by the teachers whose salaries they paid.

Within 10 years, the Islamic Courts Union exerted control over much of southern Somalia.

The US awoke to the ‘dangers’ the courts could present and gave its tacit approval to Ethiopia to invade. And Al-Shabaab, as the court’s offshoot, emerged.

Thus, while the Arab States’ threat to Somali sovereignty has its origin in Bin Laden’s secret pact with Aideed through a series of permutations, the snake ended up biting its tail — morphing into Shabaab.