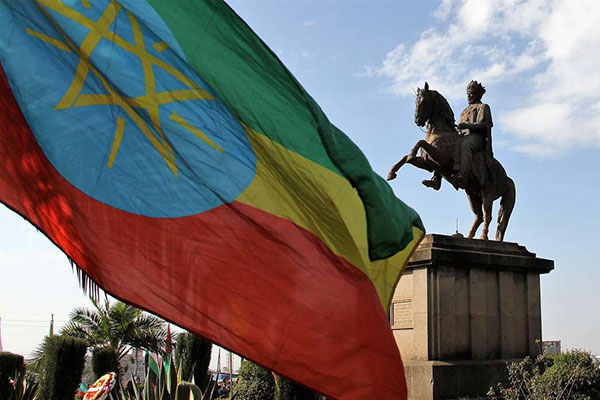 Emperor Menelik II statue and Ethiopian Flag are seen during the celebration of the 121st Anniversary of Ethiopia’s Battle of Adwa at King II Menelik Square in Addis Ababa on March 2, 2017. FILE PHOTO | AFP

Long before the European colonialists shared the coastline amongst themselves, the Abyssinian and Tigray kings were keen on it and you would meet them in the corridors of diplomacy, communicating with the kings and emperors of Europe.

For centuries, foreign powers have alternately come, conquered, and colonised the peoples of the Somali Peninsula, turning the entire region into scenes of big-power showdowns, each eager to control portions of the coastlines: Italy; France; Britain.

During Siad Barre’s reign, the Soviets and the Americans leased Kismayu and Berbera as bases.

In fact, long before the European colonialists shared the coastline amongst themselves, the Abyssinian and Tigray kings were keen on it and you would meet them in the corridors of diplomacy, communicating with the kings and emperors of Europe.

Have Somalis reason to suspect that Ethiopia might stretch its long arms solely to do just that: occupy Somalia’s seaports?

Shewa isolated for centuries and sandwiched between the highland mountains like saxifrage and had rival kingdoms like Gondar, Gojam and Tigre was an inland kingdom, as small in size as her king was in stature, its king, Menelik, had grand ambitions, large and uncontainable like the waters of the sea.

And because there were frequent wars between these kingdoms, history taught them that whoever had European backing, access to the sea and therefore firearms, would have the upper hand in the event of conflict. 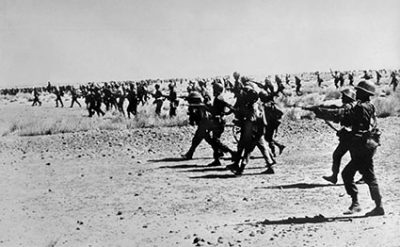 Ethiopian soldiers walk towards Somali army in the Ogaden desert during fights at the Somalia-Ethiopia border on June 14, 1978, in a war for control over Ogaden. FILE PHOTO | AFP

Yohannis, the King of Tigre, had been for a time the strongest because he had received the benevolence of the British government’s gift of arms in return for his services. What was more, he had been promised free access of a port.

But the coastline had always remained in the hands of other peoples – the Somalis and other local peoples.

In years gone by and recently too, Abyssinian kings would appeal to the Christian solidarity of Europe when the power ruling the coast happened to be Muslim. Nor were they beyond making unfounded territorial claims later when a European power did not allow them free use of the ports.

Kings Yohannis and Menelik would play one European power against the other in their attempt to secure outlets to the sea. 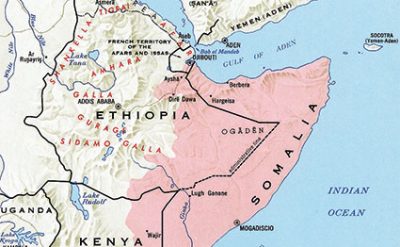 Menelik addressed the heads of the governments of Italy, France, Germany, and England in a letter in 1878: “My country is far distant from your country.

“My road to the coast, to Zeila, Tajura and Aden is at present closed by the Muslims. They prevent my receiving into my country provisions, arms, agricultural implements, artisans or even messengers of the Gospel.

“Will you kindly raise your powerful voice in order that I may have this way opened to me, for I desire to inaugurate in my country European civilisation, intelligence and arts?”

During this period, however, he does not make any territorial claim of any city-state on any coast — like Mogadiscio, Merka or Brava, three city states on the Somali coast, which had known the splendour of world fame as grand centres of commerce.

Maybe he had not by then heard of them in the way he had heard of Zeila and Tajura, the ports through which his kingdom imported “provisions, arms, agricultural implements, artisans or even messengers of the Gospel” and which he used for his country’s exports.

And before Menelik, a prominent political figure of Tigre Dajazmach Sebagadis Weldu wrote a letter in 1827 to King George III that his country “needed firearms, which could only be obtained with European assistance through Massawa.

“We want you to take Massawa from the Turks and either hold it (yourself) or hand it over to us as our country is lost by it … and the Muslim on the Red Sea coast.”

Another Tigrean king Yohannis, corresponding with a British envoy (General) Gordon, says that “in the event the taking of any of the ports is rendered impossible, the King of Tigre would be satisfied if he is at least granted “territorial, and not only functional, access to the sea.”

Desperate as ever and needing firearms, Menelik said to the French that he was prepared to give up Harar city, which had just conquered, in exchange for a port. The French were not ready to accept the exchange. He laments:

“I am about to die from anger because I have remained without bringing one (new) skill, imprisoned (as I am) … I am a man who has been sentenced to imprisonment for life and prevented from bringing into this country rifles, cannon and workers.

The French, however, would sell him plenty of arms and Italy complained to Britain about this great influx of arms sold to this “barbarous nation.”

With the help of these weapons, Menelik annexed vast territories and proclaimed himself King, then King of Kings, then Emperor as the Somalis were specifically kept unarmed and defenceless. 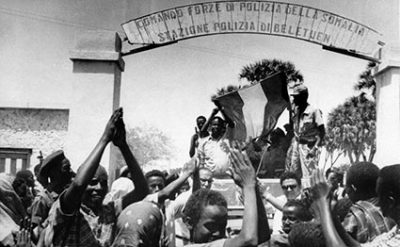 Somalian troops brandish the Ethiopian flag on February 27, 1964 in the war for control over Ogaden. FILE PHOTO | AFP

The weapons, which he had imported from France through Djibouti, gave him supremacy over all the other minor entities in the region. The small man gave himself grand titles; he had christened the territories he had annexed “Ethiopia,” and crowned himself “Emperor.”

On the other hand, Yohannis, of Tigre, determined to take a coastal city, refuses the Italian offer to open a consulate in Massawa, saying: “I wish Massawa itself,” and wrote to Queen Victoria, saying that he did not “very much mind sharing the pagan districts around the coast with the British, but with no one else.

The Italians would offer 5,000 rifles to Menelik on condition that he attacked Emperor Yohannis. Menelik who gained strength from the weapons, wrote to the European powers, “If I cannot take Tajura by sea, it is not difficult for me to seize the port from this side (overland). However, without coming to blows, I hope that civilised Europe will render me justice and give me satisfaction!”

In the same letter, he went on, “we hope that our crown which honours Jesus Christ will never be trampled to the ground by the children of Mohammed.”

And yet, a little later: “If truly you are the protectors of Christians, it is today that you must give us proof.”

Came the Scramble for Africa — and Menelik would write to the Governments of Britain, Italy, France, Germany and the Czar of Russia.

We note the change of the tone of his voice, because he is a changed man, and he would specify the boundaries of Ethiopia, which has been “for four centuries a Christian island in a sea of pagans. Formerly, the boundary of Ethiopia was the sea … our frontiers on the seacoast fell into the power of the Muslims.

At present, we do not intend to regain our sea frontiers by force but we trust that the Christian powers guided by our Saviour, will restore to us our sea coastline, at any rate, certain parts of it.

“If God gives me strength, I shall re-establish the ancient frontiers (tributaries) of Ethiopia up to Khartoum and as far as Lake Nyanza with all the Gallas included.

Haile Selassie would in 1948 present a Memorandum to the UN, saying, “Prior to the race of European powers to divide up the continent of Africa, Ethiopia included an extensive coastline along the Red Sea and the Indian Ocean.

It was only the last 15 years of the 19th century that Ethiopia had been deprived of access to the sea by the loss of the Somali Peninsula and Eritrea.

The first step in this direction was the Italian conquest of Massawa in 1885, followed by their seizure of the Benaadir and the rest of southern Somalia.

Having failed in dislodging the European colonialists, Emperor Haile Selassie would say in an interview to the UN Mandate Trusteeship territory that “Eritrea, should be given to Ethiopia.” And it was.

More recently, Mengistu Haile Mariam would say at a press conference during his reign in the mid-1970s, that “Ethiopia would defend its access to the Red Sea, even if this would make the sea redder on account of enemy blood, which we will shed.”

And the war for the coast on the Somali-speaking Peninsula goes on.