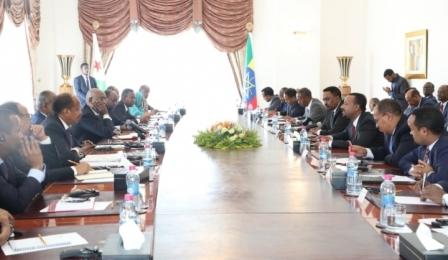 Ethiopia has requested to attain a chance of participating in port development in Djibouti.

Premier Abiy, who is in a two-day official visit to Djibouti, discussed bilateral and regional issues with Djiboutian President Ismaïl Omar Guelleh today.

In a press briefing to journalists, the two leaders said they have made joint ministerial meeting.

In order to transform the economic cooperation between the two countries into a higher echelon, Ethiopia needs to get a share in port development, the PM demanded.

Similarly, Premier Abiy said there is a wide prospect for the government of Djibouti to work in cooperation with Ethiopia in telecom and other development sectors that would further strengthening the bilateral relations.

He also stressed the need to build up the long-standing social ties and development among the people of the two countries.

Abiy pointed out that efforts will be exerted to boost up infrastructure development and trade exchange between Ethiopia and Djibouti.

During his stay, he expressed his commitment to transform the relations of the two countries to a higher level.

Djiboutian President Omar Guelleh said on his part through well-built relations between the two countries, Ethiopia and Djibouti will work in cooperation for the welbeing of their people.

The president noted that efforts will be exerted to build infrastructure networks and facilitate port service in efficient way.

Ensuring peace and stability in the region was also at the center of the discussion of the two leaders, it was learned.

In other development, Prime Minister Abiy has addressed to the Djiboutian parliament today.

The Prime Minister stressed the significance of the role of the House Peoples’ Representatives in strengthening the relationship between Ethiopia and Djibouti.