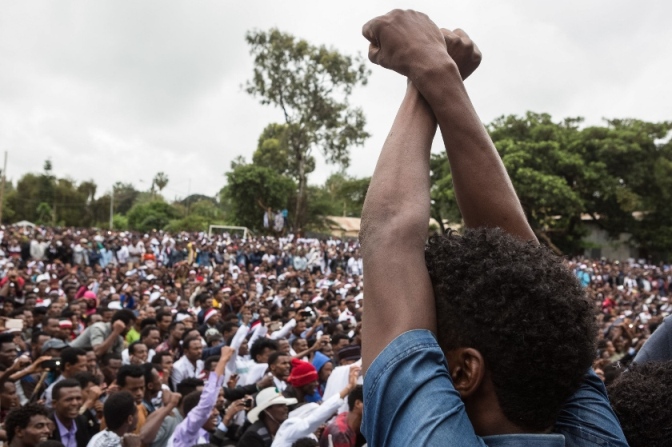 Tepid reforms and halfhearted concessions won’t save the country’s authoritarian government from its existential crisis.

For a brief moment last week, Ethiopia seemed poised to shed its reputation as Africa’s Stasi state. At a press conference on Jan. 3, Ethiopian Prime Minister Hailemariam Desalegn vowed to free political prisoners and shutter the notorious Maekelawi prison, which has long served as a torture chamber for government critics, opposition leaders, journalists, and activists.

Desalegn’s announcement shocked Ethiopian citizens and observers alike. Initial reports indicated that the Ethiopian regime had finally accepted that mistakes had been made and serious abuses had been committed on its watch. Indeed, the stark admission would have marked the first time ever that Ethiopia had acknowledged holding political prisoners in the country. (Human rights groups have estimated that they number in the tens of thousands.)

The outpouring of optimism did not last long. Within hours, an aide to Desalegn clarified the prime minister’s remarks, saying that “mistranslation” by the media was to blame for the confusion. And indeed Desalegn’s actual comments in Amharic were less clear-cut. He spoke of the need to cultivate national reconciliation and to expand democratic freedoms, adding that “some political leaders and individuals whose crimes have resulted in court convictions or their ongoing trial” would be pardoned or have their cases withdrawn. A week after the press conference, it remains unclear how many people will be freed or when, if at all.

One fact remains clear, however. Following three years of escalating anti-government protests — mostly by the Oromo ethnic group and to an extent the Amhara, who together comprise two-thirds of the country’s 100 million people — Ethiopia can no longer afford to ignore demands for political reform. For years, the regime has sacrificed respect for basic political rights and civil liberties on the altar of economic growth. And its claims of a rapidly growing economy have always been dubious at best. The status quo can no longer hold.

A staunch U.S. ally in the war on terrorism, Ethiopia is seen as a stable oasis in the troubled Horn of Africa region, which is plagued by both extremist attacks and ruthless counterinsurgency operations. This image of stability has been cultivated by well-oiled lobbyists in Washington and by an army of social media trolls on the government payroll. However, despite the outward veneer of growth and stability, all is not well in Ethiopia.

In an effort to boost lagging exports, authorities devalued Ethiopia’s currency, the birr, by 15 percent last October. The country is also struggling to mitigate the effects of massive youth unemployment, high public debt, rising inflation, and a shortage of foreign currency. The economic woes that have beleaguered Ethiopia have fueled the increasing unrest. Amhara and Oromo protesters decry economic marginalization and systemic exclusion at the hands of powerful ethnic Tigrayan leaders. The economic dividends of the country’s modest growth are not broadly shared outside the wealthy business class and associates of the ruling party. To make matters worse, a long-simmering border dispute between the Oromia and the Somali regions has left hundreds of people dead and more than 700,000, mostly from the Oromo ethnic group, internally displaced.

Taken together, these burgeoning crises have raised credible concerns about the risk of state collapse. And there are good reasons to be worried. Western donors and foreign investors alike are increasingly jittery about the political uncertainty and growing popular unrest. In its annual Fragile States Index, which predicts risk of state failure, the Fund for Peace ranked Ethiopia 15th out of 178 countries surveyed, up from 24th in 2016.

Adding to the creeping sense of doom is an internal power struggle that is ripping apart the ruling Ethiopian People’s Revolutionary Democratic Front (EPRDF), which has been in power since 1991. The EPRDF is a coalition of four unequal partners, including the Amhara National Democratic Movement, the Oromo People’s Democratic Party (OPDO), and the Tigrayan People’s Liberation Front (TPLF). Ostensibly, each party is meant to represent the vested interests of its ethnic region within the EPRDF.

In theory, Ethiopia is a federation, based on decentralized ethnic representation. In practice, the federal system has for years enabled the domination of the country’s political space, economy, and security services by ethnic Tigrayans. The TPLF represents the Tigray region, home to only about 6 percent of the country’s population. Yet the party gets the same number of votes as the OPDO, which represents the roughly 40 percent of Ethiopians who are ethnic Oromos.

This inherent tension broke the surface in October 2016, when newly elected OPDO leaders began to openly embrace protesters’ grievances and calls for reform. This marked the first sign of a split within the EPRDF and set the stage for the ongoing power struggle over how to respond to the increasingly deadly and destabilizing Oromo protests.

The Oromo protest movement has amplified the OPDO’s voice within the EPRDF. At the press briefing held with Desalegn on Jan. 3, Lemma Megersa, the head of the OPDO and president of Oromia, accused TPLF officials of planting cronies inside his party and viewing political power as their own personal property. He made this claim in the presence of the TPLF chairman — a stunning public rebuke.

On the surface, the ruling coalition now appears open to correcting course. Instead of blaming its failures on terrorists, “anti-peace elements,” or diaspora-based opposition groups as the EPRDF has done in the past, Desalegn acknowledged the need for reform. To stop Ethiopia from falling apart, however, the government will need to go much further than the halfhearted concessions hinted at by the prime minister. It must undertake a host of long-overdue political and legal reforms, including dismantling the fusillade of draconian laws it has enacted over the last two decades to stifle dissent, decimate civil society, and muzzle the opposition.

A number of prominent Ethiopian opposition leaders, activists, and journalists — some of whom are expected to be freed after Desalegn’s remarks — have been unjustly detained and convicted under a noxious trio of laws, namely the Freedom of the Mass Media and Access to Information Proclamation, the Charities and Societies Proclamation, and the Anti-Terrorism Proclamation. To ensure that prisoners who are pardoned do not end up back behind bars, and to truly reckon with the abuses committed during the EPRDF’s 27-year rule, Ethiopia’s leaders should immediately begin dismantling the machinery of oppression by repealing and replacing those laws, which have been routinely condemned for failing to meet international standards.

In addition, to turn the page on its checkered past, the EPRDF regime — which now controls 100 percent of seats in parliament — must also implement a process of national reconciliation based on the principles of inclusivity and genuine political dialogue. In his Jan. 3 statement, Desalegn cited the need for social healing as a reason for the pardon of some prisoners. It was a historic moment. But for it to translate into real change, the country’s leaders must resolve to release all political prisoners without delay or preconditions; fully implement the country’s rarely applied but progressive constitution; ensure the independence and impartiality of the judiciary; end unchecked impunity for corrupt officeholders and security officials; and hold to account those responsible for the death and displacement of hundreds of Ethiopians.

No one expects change in Ethiopia to occur overnight. The reform process will undoubtedly be lengthy and fraught with potential obstacles. But to rescue the country from the undue weight of its own repression, EPRDF leaders have no choice but to change course.

Mohammed Ademo is a freelance journalist based in Washington. He’s also the founder and editor of OPride.com, an independent news website about Ethiopia. Follow him on Twitter at: @OPride.

Jeffrey Smith is an international human rights consultant and the executive director of Vanguard Africa Movement. Follow him on Twitter: @Smith_JeffreyT