DP World, UAE and the Horn of Africa: A Tale of Two Ports

On February 22, Djibouti seized control of the Doraleh Container Terminal from its joint owner and operator, the Dubai-based DP World. The seizure was not wholly unexpected and was the culmination of Djibouti’s deteriorating bilateral ties with the United Arab Emirates and a lost legal battle with DP World to renegotiate the terms of the port concession that gave it a 33 percent equity stake in 2006. The London Court of International Arbitration Tribunal ruled against Djibouti’s claims, lodged in 2014, that DP World paid bribes in order to secure the 30-year concession. The Dubai government said it has initiated proceedings at the tribunal over the seizure. A statement by the Djiboutian government claims it seized the port over poor performance – although its volume has grown to around 1 million Twenty-Foot Equivalent Units, a measurement of a ship’s carrying capacity, annually – and additional terms added by DP World that amounted to a violation of its sovereignty.

Doraleh opened in 2009 and is the only container terminal in the Horn of Africa able to handle 15,000-ton container ships. It quickly became the most important entrepot for the region’s largest country and economy, Ethiopia, which was rendered landlocked by Eritrea’s independence in 1993. Ethiopia receives around 97 percent of its imports through Doraleh – around 70 percent of the port’s activity – in what has become an unacceptable strategic reliance on a neighbor in a region whose history has been defined by shifting alliances, constant internal meddling, and a balance of power in which no party has been able to gain the upper hand.

A second, related development has also unfolded in recent days. A year after DP World finalized an agreement with the semiautonomous region of Somaliland to develop a $442 million commercial port in Berbera, Ethiopia inked a deal with the port operator and Somaliland’s government to acquire a 19 percent stake in the port. There are reportedly plans for DP World to upgrade the connectivity infrastructure linking Berbera to the Ethiopian border that would allow Addis Ababa and potentially greater East Africa to reduce their sole dependence on Djibouti, which would have significant strategic implications for regional geopolitics. Many analysts speculate that this agreement to build up a direct competitor to Doraleh is what may have been the proximate cause of Djibouti’s seizure of the terminal from DP World. 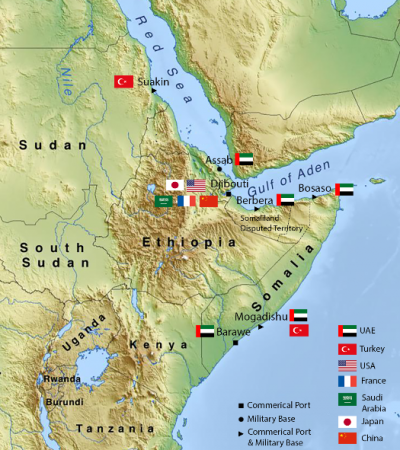 The tale of these two ports reveals the increasingly complex dynamics animating the geopolitics, and the more localized politics, being shaped by the competition among aspiring regional powers of the Middle East – particularly Gulf Arab states and Turkey – and China for influence in the Horn of Africa. Some analysts and senior U.S. military officials speculate that Djibouti may try to turn the Doraleh Container Terminal over to Chinese investors. A new $600 million project, Doraleh Multipurpose Port, was built by China Merchants Port Holdings, which in 2013 bought a 23.5 percent stake in Doraleh Container Terminal’s majority owner, Port de Djibouti. The Export-Import Bank of China also helped finance the over 470-mile, $4 billion railway linking Doraleh to Addis Ababa.

The intra-Gulf Cooperation Council crisis has added another destabilizing variable, as countries, parties, and elites in East Africa have been forced to choose sides. In Somalia, this has exacerbated tensions within political factions in Mogadishu, as well as between the federal government and breakaway and semiautonomous regions of the country. These dynamics have combined with more direct fallout from the crisis, such as the Emirati and Saudi move to freeze budgetary support to the federal government that helped pay security forces’ salaries, to create a divided and distracted political and security environment that al-Shabab has sought to exploit with an increase in attacks.

In Somalia’s 2017 presidential election, the candidate allegedly backed by the UAE lost to his rival, Mohamed Abdullahi Mohamed, known as Farmajo, allegedly supported by Qatar and Turkey. The federal government has not taken sides in the GCC dispute, though Farmajo and Cabinet ministers have traveled frequently to Saudi Arabia and the UAE. While Farmajo has sought a role for the federal government in the port and military base deals, so far those demands have not been met and the direct engagement of breakaway regional governments has added a centrifugal dynamic to already fragile relations between Mogadishu and semiautonomous state governments.

Recent developments show the bid for influence is indeed a two-way street. Along with the competition by outside players has come greater leverage for Horn of Africa countries, whose elites have long been adept at playing external patrons off one another. Ethiopia has to some degree succeeded in diluting Abu Dhabi’s reliance on its enemy, Eritrea, by supporting its plans for the Berbera port. In 2015, after losing access to Djibouti for military operations, the UAE constructed a base in the coastal Eritrean city of Assab, which has been vital to its operations in southern Yemen. By supporting the UAE’s military and commercial infrastructure plans in Somaliland, Ethiopia – the Horn of Africa’s largest and most powerful country – also contributed to the fracturing of Somalia by encouraging the de facto consolidation of Somaliland’s independence. A weakened Somalia unable to challenge Ethiopia’s dominance by supporting ethnic Somali insurgents is a pillar of Addis Ababa’s regional policy. Somaliland agreed to lease to the UAE the old Soviet military base in Berbera near the DP World project, which Abu Dhabi plans to expand, in exchange for a reported $1 billion investment in infrastructure, training, and job creation in the breakaway Somali region. But this plan has, at least temporarily, been complicated by local political dynamics. Somaliland has reportedly halted the construction of the base over competing claims by local clans over compensation for the land being developed. In Sudan, the UAE and Saudi Arabia have led efforts to rehabilitate President Omar Bashir in the international community by lobbying for U.S. sanctions on Sudan to be lifted. Bashir agreed to cut ties with Iran and send troops to fight for the Saudi-led coalition in Yemen. In December 2017, however, Bashir also agreed to lease Turkey the Red Sea island of Suakin for development. Though Turkey has denied it, concerns quickly arose that Ankara planned to build a new military base on the island, which would be its second in the Horn of Africa with the first in the Somali capital of Mogadishu. The agreement came as Ankara’s ties with Riyadh and Abu Dhabi were at their nadir. Turkey’s soft power and popularity in Mogadishu and other parts of Somalia is formidable, and was built on its early economic, diplomatic, infrastructure development, aid, and education involvement with the country. As the temperature of its rivalry with Riyadh and Abu Dhabi increases, Ankara is leveraging this advantage.

The confidence with which Horn of Africa elites are pursuing their own interests at the risk of angering new patrons underscores the high stakes for the participants in this so-called “new scramble for Africa,” and also their long-term intent. Djibouti in particular emerged over the past decade as a strategic focal point next to the Bab el-Mandeb shipping lane, existential for the flow of Gulf energy to Europe and goods between Asia and Europe. It has leveraged its location for lucrative basing deals for current and emerging world powers alike. The United States, China, Japan, Saudi Arabia, and former colonial ruler France all have bases in Djibouti.

But for the UAE, which was forced to look elsewhere after dramatically falling out with Djibouti, building military bases along the littoral on both sides of the Red Sea is key to first ensuring security interests such as its operations in Yemen, counterterrorism and antipiracy operations, and strategic depth vis a vis Iran. However, the UAE’s longer-term interests – as well as those of its competitors – are economic and strategic. The country is working to make itself an essential component of China’s Belt and Road Initiative and secure Dubai’s Jebel Ali as the key logistics and trade hub linking Asia to Africa via DP World infrastructure, in the face of competition by a glut of new ports built by rivals with similar ambitions in Iran, Pakistan, Oman, and elsewhere along the Horn of Africa. DP World is involved in two other port projects in breakaway Somali states, as well as logistics infrastructure and ports projects in Rwanda, Mozambique, Algeria, and Mali.

The Horn of Africa and the broader East Africa region have some of the fastest growing economieson the continent, with emerging middle classes, but the relatively untapped markets are in dire need of investments in infrastructure and a range of sectors to cater to these new consumers. State-backed and private investors from the UAE have invested in a wide range of non-energy sectors, from finance and banking to construction, tourism, food, entertainment, and agri-business.

The UAE is also trying to make the nature of its engagement more attractive for African governments and private sector partners: Rather than following the path of China, which has been perceived negatively as following a pseudo-colonial model in Africa, it is looking more toward the Turkish model. Investments such as DP World’s in Somalia or military bases come with packages of infrastructure investment, training, and education for workers and security forces, as well as inducements such as greater numbers of visas to the UAE. Food and water security continues to be an important interest for the UAE and other Gulf countries in East Africa. Emirati companies are seeking to avoid the political pitfalls that have caused past investments in land for food production to fail. Privately owned Al Dahra Holding, which owns farmland in Africa, claims to use a 50-50 sharing formula for produce with local companies and hires local workers.

The competing interests of the new foreign entrants into the Horn of Africa’s political economy may lead to better terms and more equitable deals for governments and burgeoning economies hungry for investment. But the sudden abrogation of DP World’s Doraleh concession also lays bare the growing risks for the aspiring regional powers. The deepening fissures of Somali politics, in no small measure due to Middle East powers’ attempts at influence, also illustrate the risks for Horn of Africa societies, whose strategic location and economic potential paradoxically may lead them on a more complex – and possibly treacherous – path.

Taimur Khan is a non-resident fellow at the Arab Gulf States Institute in Washington and an independent journalist.

UAE and the Horn of Africa: A Tale of Two Ports