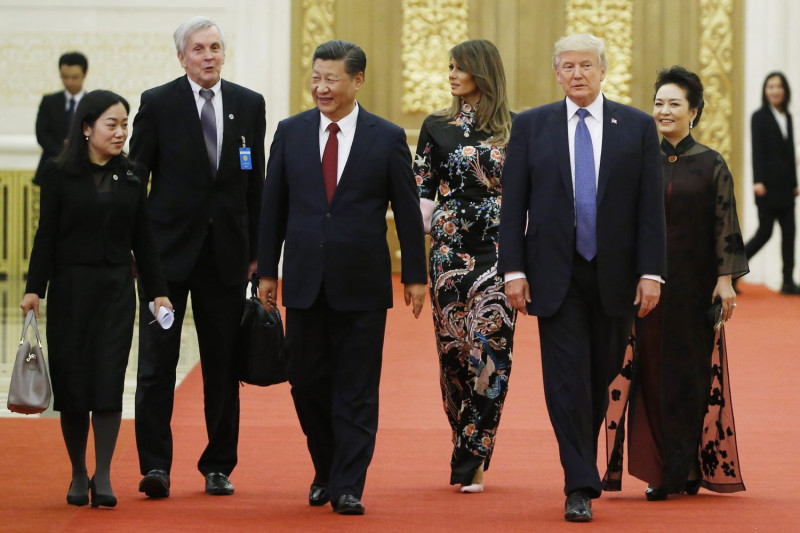 n August, the U.S. Office of the Director of National Intelligence claimed publicly that China “prefers that President Trump – whom Beijing sees as unpredictable – does not win reelection.” But these assessments tell only half the story, and Chinese open sources suggest the need for a more nuanced view.

While Chinese leaders may wish for a reprieve from President Donald Trump’s recent aggressiveness, they also believe that he has weakened American power and accelerated American decline. It is this latter judgement that is more consequential, encouraging Beijing to challenge Washington not only in Asia but globally, too.

As I argue in my forthcoming book The Long Game: China’s Grand Strategy to Displace American Order, Chinese leaders have constantly assessed and reassessed American power. Since the end of the Cold War, each leader has publicly anchored Chinese grand strategy to concepts like “multipolarity” and “the international balance of forces” that are essentially polite euphemisms for the relative balance between Chinese and American power. When China’s perception of American strength shifts, its strategy generally changes.

Over the last 30 years, this has happened twice and produced two strategies. The first time was after Tiananmen Square when the Soviet Union’s collapse led China to see the United States—once a Cold War quasi-ally—as a powerful and ideologically threatening adversary. In response, Chinese leaders such as Deng Xiaoping and Jiang Zemin encouraged the country to “hide its capabilities and bide its time.” This first Chinese strategy was about quietly blunting American regional influence. Beijing used asymmetric capabilities to thwart American military power, trade agreements to constrain American economic coercion, and membership in regional institutions to stall American rule-setting and coalition-building.

A second strategic shift came 20 years later, when the global financial crisis of 2008 convinced Beijing that the United States was weakening. Chinese leader Hu Jintao revised China’s Deng-era strategy to emphasize “actively accomplishing something.” This second Chinese strategy was about building regional order. Beijing now openly pursued power projection capabilities to intervene in the region, used the Belt and Road Initiative and economic statecraft to create and wield leverage over others, and built international institutions to set regional rules.

We are now living through a third strategic shift. The process began four years ago when the United Kingdom voted to leave the European Union and Donald Trump was elected president of the United States. Beijing was shocked that the world’s most powerful democracies were withdrawing from the international order they had helped erect. As Chen Jimin at China’s Central Party School observed, when it came to facilitating China’s rejuvenation, “The Trump administration and Brexit delivered star performances.”

Prominent Chinese foreign-policy scholars have been even more pointed in this period. They have argued that the “greatest change” in the “great changes unseen in a century” is the shifting balance of power between China and the United States. Zhu Feng, for example, declared that as Western countries were consumed by populism “the East rises and the West falls.” Yan Xuetong argued that “Trump has ruined the U.S.-led alliance system” and ushered in “the best period of strategic opportunity for China since the end of the Cold War.” Wu Xinbo assessed that the United States was “spiritually exhausted, physically weak, and could no longer carry the world.” Jin Canrong modified an official formulation to note “that world structure is changing from one superpower, many great powers, to two superpowers, many great powers.”

This shifting perception of the United States preceded the COVID-19 pandemic. And just as past reassessments of American power triggered strategic adjustment, so did this one. During Trump’s first year in office, Xi delivered a series of major speeches that suggested it was time to “leave behind” the era of “hiding capabilities and biding time” and to now move toward the “world’s center stage.”

This third Chinese grand strategy is focused on expansion. It seeks to spread China’s influence beyond Asia and contest the foundations of U.S. global order. Since Trump’s election, Xi has repeatedly encouraged Beijing to “lead in the reform of the global governance system” and to offer “Chinese solutions” to various international challenges—these are now the top-funded research priorities in the country’s think tanks and universities. As part of this global turn, Beijing has also begun to pursue a global military with overseas facilities, to directly challenge U.S. financial power with sovereign digital currencies, to reshape global and not merely regional institutions, and to self-consciously compete in the technologies of the Fourth Industrial Revolution—all with an eye toward filling a growing U.S. void.

The American response to the 2020 coronavirus pandemic—which has left over 200,000 Americans dead, millions infected, and much of the U.S. political leadership incapacitated with illness—has reinforced preexisting Chinese views on American dysfunction and decline. As Yuan Peng, the head of a Ministry of State Security think tank, argued, America’s poor response to COVID-19 “is a blow to America’s soft and hard power, and America’s international influence has suffered a serious decline”—with the pandemic’s implications as consequential for world politics as a great-power war. The resultant confidence has likely encouraged Beijing to be more assertive in its neighborhood and less concerned about the implications of its repression in Hong Kong and the damage done by its increasingly off-putting public diplomacy.

That overconfidence may be unfounded, particularly as China faces a demographic slowdown, diplomatic setbacks, and a middle-income trap. It may also be somewhat artificial, a product of a party line reproduced in key texts and academic commentaries that resembles propaganda rather than objective analysis. Even so, Beijing’s confidence—justifiable or not—has an official imprimatur, shapes Chinese strategy, and encourages Beijing to take dangerous risks. It cannot be dismissed.

While China’s views of Trump are complex, the logic behind them provides a fairly straightforward road map for U.S. policy in a Trump or Joe Biden administration. For Beijing, a United States that is less engaged abroad, more divided at home, and seemingly uninterested in pandemic management or economic competitiveness is one with dim prospects. The single most critical variable shaping China’s strategy has always been its assessment of American power. And for that reason, the most urgent imperative in Washington is a policy—foreign but especially domestic—that proves to Beijing that the United States is not in terminal decline.

Rush Doshi is the director of the Brookings China Strategy Initiative, a fellow at Yale Law School’s China Center, and the author of The Long Game: China’s Grand Strategy to Displace American Order, forthcoming in 2021.