Arab Gulf states in the Horn of Africa: What role do they play? 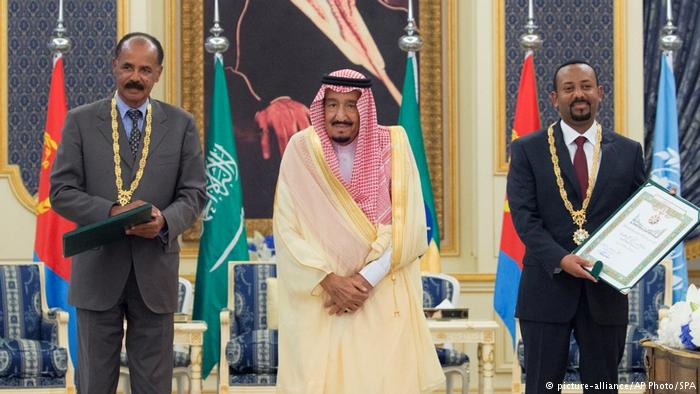 Ethiopia and Eritrea didn’t pen their peace agreement in Addis Ababa or Asmara, but in Saudi Arabia with the Emirates alongside. Are economic and military interests increasingly binding Gulf states and the Horn together?

The Red Sea, which separates Africa from the Arabian Peninsula, is just 355 kilometers (220 miles) wide at its broadest point. The major shipping route could be an economic treasure trove for any regional power. Yet for the last ten years, the water route spanning the Gulf of Aden in the south to the Suez Canal in the north has been a difficult one to navigate. Somali pirates, border disputes between Eritrea and Djibouti, landlocked Ethiopia’s attempt to gain Red Sea access, and the 3-year-old war in Yemen have made the region volatile. 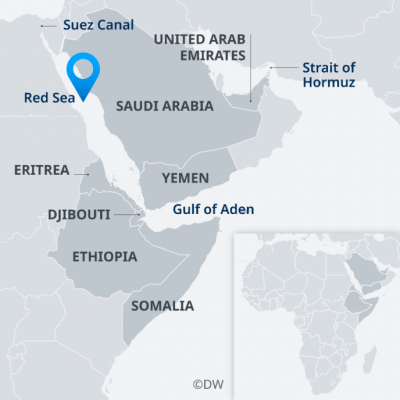 It’s therefore no wonder that the 2018 peace deal between long-standing belligerents Ethiopia and Eritrea was warmly welcomed in the region. For allies Saudi Arabia and the United Arab Emirates (UAE) it was a triumph. The two Arab Persian Gulf states brokered the peace accord between the Horn of Africa neighbors in the Saudi city Jeddah. Moreover, they also got Djibouti to sit down at the negotiation table with its border rival, Eritrea.

These hopeful winds can also be seen as winds of change. According to analysts, Saudi Arabia and the UAE are jointly positioning themselves as the major power houses among the Arab states of the Persian Gulf.

Alex de Waal, who runs the World Peace Foundation think tank at Tufts University in the US, sees Saudi Arabia’s push for economic dominance as a method of security.

“About 10 years ago the Saudis began developing plans for a Red Sea fleet and controling the Red Sea,” he told DW. “Part of the reason for that was the fear that if the Iranians were to block the Strait of Hormuz [waterway exit from the Persian Gulf between Iran and the UAE], the Saudis would need an alternative outlet for their oil. So they started constructing pipelines and oil refineries on the Red Sea coast, therefore needing security at both ends of the Red Sea.”

Elizabeth Dickinson, an analyst on the Arabian Peninsula with the International Crisis Group, also thinks the Saudi Kingdom is stepping up its international political involvement. “Saudi Arabia is a major donor and sees Africa as a new diplomatic priority.”

The analyst sees the Emirates as acting in a similar vein. “The UAE has positioned itself as a major potential investor in logistics, ports, and trade development,” she explains.

In August 2018, Ethiopia announced that the UAE had plans to invest in an oil pipeline between Eritrea and Ethiopia. This was just a month after Eritrea’s president, Isias Afwerki, welcomed Ethiopia’s reformist Prime Minister Abiy Ahmed in Eritrea’s capital, Asmara, for the first time in 20 years.

Then in September, shortly after the peace accord in Jeddah, Afwerki was back in the Gulf. This time he traveled to the UAE’s Abu Dhabi to hold talks about investment and economic cooperation with its crown prince. Though the two countries revealed little about the visit, Eritrea’s Minister of Information, Yemane Meskel, posted a picture of the meeting on Twitter:

The Horn of Africa had always been a tough terrain for Saudi Arabia and the Emirates because of the long-standing conflict between Eritrea and Ethiopia. Ethiopia is traditionally the strongest regional power, but due to recent domestic troubles, its lack of access to a sea port, and its close ties to Saudi Arabia’s rivals Qatar and Iran, it has also been a difficult partner.

In theory, this should make Eritrea economically attractive to the Saudis and the Emiratis since, as de Waal points out, they needed security on the African side of the Red Sea to further develop economic ambitions. “Eritrea was an obvious member,” the think tank leader says. And Eritrean President Afwerki has been more open to the allies in the Gulf. “But Eritrea is always going to be a junior partner visa Ethiopia — partly because it’s smaller economically and militarily weaker.”

For the last 20 years, de Waal says, Ethiopia’s strategy has been to isolate Eritrea’s Afwerki from the African Union and other regional bodies. When it came to convincing Ethiopia, the Gulf states saw their chance in Ethiopia’s new prime minister, Abiy Ahmed. He had already indicated his willingness to reopen diplomatic ties with Eritrea. “In the context of the new government in Ethiopia, they [Gulf states] stepped in and said to Abiy: You have a very serious financial problem. We will help you out,” de Waal explains. In return economic deals were struck and the peace deal was sealed.

The peace deal could also bring Ethiopia an economic upsurge of its own. “Ethiopia’s economic growth has long been constrained by its limited access to the sea. Almost all of its export traffic is today directed through Djibouti,” says Dickinson. “If Ethiopia can use ports in Eritrea, as well as new ports under development in Somalia, the region could see a major surge in commercial trade.”

Horn of Africa help for Saudi-led coalition in Yemen

The Horn of Africa is not only of economic interest to the Gulf states but also of military interest. The region is the base for some of Africa’s biggest military interventions. The UAE has a base in Eritrea and Dijbouti hosts Saudi troops, among others, while Turkey and Qatar both have bases and close relations with Somalia and Sudan.

In particular, Saudi Arabia has taken on a highly disputed role in the Yemeni Civil War as the leader of a military coalition supporting an ousted Yemeni government against Iranian-backed Houthi rebels. The coalition involves not just the UAE and the US, but also most of the Horn of Africa. Sudan, Djibouti, Somalia and Eritrea have made their airspaces, waters and military bases available for the war.

Though Saudi Arabia is leading the coalition, de Waal is intrigued by the UAE’s role.

“What’s interesting is the extent to which the Emirates emerged as an equal partner in that the Emirates took responsibility for military operations in Aden [where the ousted Yemeni government is based] and along the coast,” de Waal explains. “And in order to do that the Emirates established a military base in Assab [Eritrea] which has been their principal base for air operations around Hodeida [Yemen].”

According to analyst Dickinson, coalition forces have trained local Yemeni forces in Assab and then reinserted them into battle. Reports of Sudan and Eritrea themselves having troops on the ground in Yemen are denied by authorities. Officials also denied the existence of secret prisons for Yemeni prisoners in Eritrea’s port in Assab. In June 2017, AP had interviewed the relatives of detainees in such prisons, with Human Rights Watch also citing similar sources in its reports.

A shift in regional politics

While the future of peace between Eritrea and Ethiopia remains unclear, de Waal does believe that recent developments point to a political shift between the Horn of Africa and the Arab Gulf states.

The two East African nations went to Saudi Arabia instead of the African Union, de Waal points out. “This is an interesting and significant symbolic switch from the peace and security of the Horn of Africa being grounded in African institutions and to being grounded in Middle Eastern principles and processes.”

Arab Gulf states in the Horn of Africa: What role do they play?