Abukar Arman: Insecurity in Somalia: Is Mogadishu’s ‘Green Zone’ Part of the Problem? 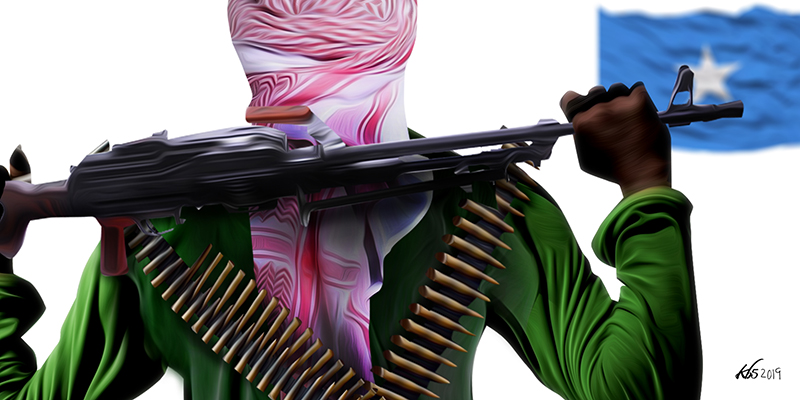 For more than a decade, the international community has been fed the narrative that the presence of AMISOM troops is critical for the security of Somalia. ABUKAR ARMAN argues that the presence of these troops and various foreign mercenary security-related outfits in Somalia may actually be making security more precarious in this fragile war-torn country.

Naturally broken nations like Somalia that require intervention from the international community require a safe area where diplomats and other officials representing key governments and organisations could be hosted. Hence Somalia’s heavily guarded “Green Zone”, or Halane as it is commonly known.

As a compound dominated by African Union Mission in Somalia (AMISOM) soldiers, mostly from Uganda, and a network of guerilla diplomats who respect no diplomatic boundaries and which is infested with “economic hitmen”, foreign intelligence, counter-intelligence, counter-insurgency and counter-stability (mercenaries) agents, Halane became a mega bazaar for political exploitation and zero-sum trade.

Twelve years after becoming the artificial nerve centre of Somali politics, it became clear that Halane needs to undergo a detoxification process in order to serve its original objective: to help Somalia re-emerge as a nation-state capable of protecting itself and running its own affairs.

To contrast the past with the present, allow me to take you on a personal tour. In 1979, immediately after graduating from high school, I had to report to Halane – an old Italian colonial relic turned to a military training camp – for 6 months mandatory boot camp before starting one year of a mandatory “national service” programme.

I remember those long march drill sessions under the scorching Mogadishu sun. I remember that pitch-black night when I was placed on guard duty in the area where the airport’s only runway kissed the Indian Ocean. In those days, no flights landed after sunset. And legend had it that that area was the playground of some hoof-legged, man-donkey soldiers. Throughout the night, my senses remained on hyper-alert. Even the gentle wind of the night stirred the spookiest waves of emotions in the heart.

I also remember the day when a few of us were lined up for singing loud. One by one we were taken out of the room to be handed our punishments. When it was my turn, a guard led me to another room with a door wide open where I was surprised by another soldier hiding behind the door with a cable piggin’ string. The rest was a brief painful episode of kicks, curses and screams.

Today that Halane compound has expanded immensely. Though there are some good things, such as training sessions that take place inside the compound, unfortunately, it has become a place where Somalia’s top leaders are subjected to various levels of humiliation and psychological subjugation. It’s where the carrots are dangled to coopt Somali officials and where sticks are wagged so that the self-confident among them are psychologically broken down until they accept behaving like guests in their own country. It is where the elite with political ambitions are required to go to get their blessings and a few power-projecting pictures for social media. It is where resolutions that undermine Somalia’s central government authority and legitimacy are concocted despite the fact that Somalia’s transition period ended in 2012.

Resolution 2472, adopted by the Security Council on 31 May 2019, is peppered with language that affirms, as I have been arguing for a while, that Somalia is in a stealth trusteeship. Despite the opening diplomatic pacifier of “reaffirming its respect for the sovereignty, territorial integrity, political independence, and unity of Somalia” the Resolution commands the Federal Government of Somalia to expedite its settlement with federal states on “resource and power-sharing to be enshrined in the revision of the Provisional Federal Constitution” and “generation of affordable Somali forces.”

In other words, 3,000 independently commanded troops per federal state as spelled in the so-called National Security Architecture. Enough to protect a number of questionably acquired foreign projects while keeping Somalia in state of perpetual security dependence. The federal state of Galmudug became the first to offer its contingent or the Ahlu Sunna Wa Jama (ASWJ) militia. Though this is set to intensify intra-clan sensitivity, IGAD wasted no time in praising the effort.

While certain elements within the international community use counter-terrorism to justify having AMISOM troops in Somalia or bankrolling covert mercenary operations, these foreign forces are neither aligned with the Federal Government of Somalia and AMISOM’s strategy to fight Al Shabaab nor are they part of the command structure that is accountable to either one. Because, as I argued in Straight Talk on Somalia Insecurity, Al Shabaab’s deadly escapades provide priceless cover, if not legitimacy, to their presence.

Benevolent predators who are quick to offer one mini unsustainable project or another to improve perception are plenty. Funding is often delivered through various international NGOs that charge hefty overheads and subcontract local ones that become the funders’ indigenous detractor. Though the funding comes with strings attached, seldom is it used to pressure the government to meet its obligations, such as completing the constitution and getting it ratified, establishing a constitutional court, and refraining from consolidation of power by the executive branch that made the parliament irrelevant.

The more UN officials and AMISOM continue to hide behind heavily fortified bunkers at the airport area – the de facto extension of Halane – the more there will be militarisation of Mogadishu and the more the old routine of holding international conferences at Mogadishu’s international airport or in Nairobi will continue to be justified.

Is Mogadishu safe enough for the United Nations Assistance Mission in Somalia (UNSOM) and AMISOM to be decommissioned? The one thing that we know is that as long as both are there Somalia will remain in a state of perpetual dependency, insecurity, and fragmentation. As I wrote in a number of my previous articles, AMISOM contributed a lot to Somalia in the earlier months and years. But everything changed when armies from the frontline states of Ethiopia and Kenya were allowed to join AMISOM. That is when the original peacekeeping objective became blurred.

Flushing all questionable elements out of Halane is impossible if UNSOM remains the de facto institution under which Somalia’s government is governed. And there is no end to UNSOM if the UK remains the “pen holder” that spearheads all Somalia-related issues at the United Nations. The Federal Government of Somalia must take an unequivocal stance on UNSOM. The Security Council cannot legitimately impose its will on a state that is neither oppressing its citizens nor is hostile toward its neighbours. UNSOM is there because the Somali government imprudently endorses its mandate.

Could a change in UNSOM’s status expedite the departure of AMISOM? Sure.

Despite the narrative of the security void that might be created, AMISOM, along with the various mercenary companies roaming around Somalia, have been the main causes of the haemorrhaging of security-related funding for more than a decade. That is the reason why Somalia does not have a unified, robust, highly trained and well-equipped army.

Ending AMISOM would end their widely covered corruption, rape, and extrajudicial killings. Not to mention the conflict of interest generated by the presence of Kenyan and Ethiopian troops who are in the thick of Somalia’s internal politics. Perhaps stopping reliance on AMISOM could motivate the Somali government and the various armed militias around the country to take security more seriously and to unite against their common enemy – Al Shabaab – for their own survival. Without AMISOM escorts, it may also compel the government to reduce the weekly travels to foreign destinations for one powwow or another and spend the saved funds on various basic public services, which are sorely lacking.

Good politics is the willingness to engage in transparent, benevolent, and ethical negotiations with others to find a middle ground on issues of mutual interest. It is to enter from the front door in good faith while respecting each other’s spaces and rights.

There is absolutely nothing wrong with doing business or creating partnerships with foreign nations so long as those relationships are mutually in the best interest of all sides. Those seeking genuine economic or strategic partnerships must be willing to refrain from making matters worse, and be willing to give the government the critical space it needs to make peace with the peripheral authorities, and establish total control of Somalia’s territories.

Unfortunately, at this frail stage, before a genuine Somali-owned reconciliation, corrupt Somali leaders at all levels and their partners in Halane continue signing duplicitous land, oil and maritime deals in ways that outrage common sense before decency and integrity. With the current high tension and growing volatility within various federal states resulting from territorial disputes and other contentious issues, these corrupt deals are only going to lead to perpetual clan-based wars.

Somalia cannot afford to sleepwalk into the growing volatility of the region, the political and economic pitfalls of a rapidly changing world, and the systematically shifting world order. Somalia’s survival depends on being a step ahead of those who wish her ill or who are bent on ruthlessly exploiting its dysfunctional political condition for their zero-sum ends.

Halane is where the instruments of political compulsion are currently concentrated. Somali leaders must radically change their ways and govern in ways that protect Somalia’s national interest and resources.

Those who are positioning themselves to replace the current government in 2021 must not ignore the groundswell of public discontent regarding Halane politics. They must forge a viable strategy to advance the will of the people.

Abukar Arman is a former diplomat. He is a widely published foreign policy analyst with a focus on Somalia and the Horn | foreign policy/Islam/Horn of Africa /extremism | Twitter: @Abukar_Arman or reach him via e-mail: [email protected]