Abukar Arman: Clashes at the Intersection of ‘Rand’ and ‘Martin’ 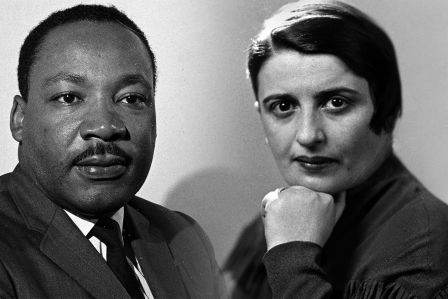 In a ‘post-truth’ era that is systematically corroding honest discourse and objective analysis, one fact remains irrefutable – America is at a historical turning point. The boundless privilege often afforded to the social, political, and economic elite commonly referred to as white privilege is being questioned. Critical values-driven conversations on race, income inequality, and injustice are emerging, though methods of engagement are seldom cordial.

Routinely right-wing pundits frame the impetus as capitalism vs socialism, or conservative patriotism vs. liberal vagabondry, or Judeo-Christian values vs. Islamic sharia. However, the real impetus is the incompatible world views of two of the most influential thinkers of our time – Ayn Rand and Martin Luther King, Jr.

Is acquisition of power to control people and resources the highest human objective or establishment of justice by fairly leveling the playing-field for all? Let us address this—perhaps most critical issue facing America today—through the lenses of President Donald Trump and the alienated former NFL quarterback, Colin Kaepernick.

Ayn Rand was a philosopher who succeeded in capitalizing the dark side of human nature. She promoted radical individualism or rationalized selfishness as the most ethical objective. In much of her writings and talks, she ridiculed concepts such as common good, empathy and altruism. “If any civilization is to survive, it is the morality of altruism that men have to reject,” she thematically preached.

So, teamwork and patriotic duties such as military service should only be tolerated to the extent that they serve the individual’s selfish motive. And taxation is not good because it makes free public education, social security and unemployment benefits available but because it is a force multiplier in shielding the wealthy from contributing to the common good.

According to Rand, happiness by any means is the highest virtue and the proof of one’s “moral integrity”. The bigger one’s exploitation-tool-box the more respect one earns.

Today, the White House is occupied by a bono fide Randian ‘hero’- a rich and powerful man who is belligerently driven by selfish motives, an unscrupulous high achiever, and an amoral chronic liar who already delivered over 10,000 public lies in 3 years.

While the impeachment may have secured him a special seat of infamy, this Randian character is even more emboldened to seek a second term and rip America apart for a self-aggrandizing objective.

All great things come with costs. Therefore, nothing noble could be achieved in life without a sacrifice of one kind or another. Great men and women who impacted the world with the power of their ideas and the courage of their moral principles have understood that tradeoff.

“Our lives begin to end the day we become silent about things that matter,” said Dr. Martin Luther King. He also said: “There comes a time when one must take a position that is neither safe nor politic nor popular, but he must take it because his conscience tells him it is right” – a bold non-violent demonstration of outrage to compel conversation and reform.

For Colin Kaepernick that time came on September 1, 2016—the 49ers’ final preseason game—when the star quarterback kneeled during the U.S. national anthem to bring attention to a countrywide pattern of lethal police brutality targeting unarmed black men who presented no threat and the institutional cover ups that ensures them impunity. Compare that uniformed thuggery to how the police routinely arrest white suspects, even armed ones, unharmed.

Though there are many good cops across America who discharge their duties faithfully and professionally, racial disparities when facing the justice system is a reality that none can ignore. According to a team of researchers from Boston University “structural racism is an important predictor of the Black-White disparity in rates of police shootings of unarmed victims across states.” Yet, the Martinian hero’s career was torpedoed as the NFL owners colluded to blacklist him.

When Kaepernick said “Love is at the root of our resistance,” he, in essence, was invoking the long history of civil rights’ non-violent movement and the ideology that human-beings achieve their most noble achievements when they selflessly devote their lives to causes that are more important than their own desires and needs.

Enduring all sorts of abuses and ridicule including from President Trump, Kaepernick became the poster man of a widespread outrage against police brutality. He became the hero who sacrificed his career and financial interest, a stance that in due course won him various accolades and recognitions from various groups such as Amnesty International who declared him “Ambassador of Conscience” and the sports gear icon Nike who selected him as the most prominent sports figure in their line of “Just Do It” ads- a controversial decision that proved lucrative as Nike’s stock value soared.

No nation on earth has ever inspired the masses to yearn for freedom, democracy, and justice while sustaining those great ideals with tyranny of ethnic-cleansing, cruelty of slavery and exceptionalism of white privilege than the United States of America. Yet that baffling duplicity still haunts the American conscience in profoundly eerie silence.

In recent years, many videos of police brutality and cold-blood killings have been emerging on social media. Overwhelmingly, the victims were unarmed and often unthreatening African-American men who are stopped for minor traffic violations. The pattern and the frequency were outrageously unnerving, hence turning the spotlight on militarized policing in general and callously bigoted policing that targets one particular race or economic status.

Any society that allows economic wealth, political power, flow of information and production of ideas to be manipulated by an exclusive few privileged by race, class, clan or conviction is bound to fail. The same is true for any society that actively supports or tolerates systemic marginalization or outright repression of a segment of its citizenry.

Once the public conscience is awakened, power must be fairly negotiated at the round table or it would ultimately be arbitrarily adjudicated in the public squares or violently fought for in street corners. And history of the human race is nothing more than a stark testament.

In this digital era of recorded history where every facet of the human experience could be easily accessed, appraised, and arbitrated with a few keystrokes, shame on us if we have not yet learned that without justice, peace is unattainable; and without peace, life is unbearable.

Abukar Arman is a former diplomat. He is a widely published foreign policy analyst with a focus on Somalia and the Horn | foreign policy/Islam/Horn of Africa /extremism | Twitter: @Abukar_Arman or reach him via e-mail: [email protected]